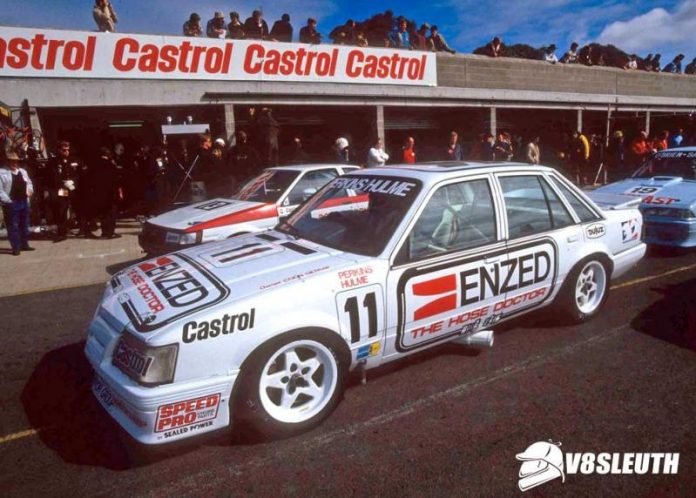 The Commodore driven by World Champion almost ready to rumble …

ONE of Larry Perkins’ former Enzed Commodore Group A race cars is undergoing restoration work ahead of a return to the track in 2018.

Current owner of the Perkins Engineering-built VK, Steve Perrott, has retained the car for over a decade and, after spending time at the wheel of his ex-Roadways/Gown-Hindhaugh A9X Toranas, is ready to slip behind the wheel of another classic Holden.

His Perkins Commodore is chassis PE 002 and was the second of two VK Commodores that Perkins built in 1986 though it did not race until the following year.

The car debuted at the 1987 Nissan-Mobil Wellington 500 as the #11 Enzed-sponsored entry with Perkins and David Parsons at the wheel.

Unfortunately Parsons crashed the car and the duo failed to score a result.

The Commodore was quickly repaired and returned for the Pukekohe 500 a week later, with 1967 F1 World Champion Denny Hulme joining Perkins in what ended up being the car’s one and only victory.

The car was retired at the end of the ’87 season after crashing out in the early laps of the James Hardie 1000 at Bathurst and spent a lengthy period resting in Tasmania before being sold to Perrott.

The Melbourne-based plumber has since enlisted help from ex-Perkins staff to get the VK up and running again.

“I’ve got Neill Burns, who worked for Larry back then, building an engine for it as we speak,” Perrott told V8 Sleuth this week.

“We’ve just lodged the COD (Certificate of Description) application with CAMS. But everything’s there, we’ve got the logbook and Jack Perkins has been helping out with old photos. He’s got a lot of photos from his Dad’s collection.

“I’ve had that car for over 10 years, it’s just been sitting in the shed with a car cover over it. So we’re going to give it a bit of paint and get it looking pretty again.”

Perrott is aiming to have the car ready in time to compete in the Heritage Touring Car series next year after enjoying success behind the wheel of his immaculate A9X Toranas.

“I’m planning on semi-retiring the Toranas,” he says.

“I’ll bring them out for special occasions, but I want to do the Heritage Touring Car rounds in the VK next year.”

Click through if you’re a subscriber and want to read the history file on this PE 002 chassis on the V8 Sleuth website.