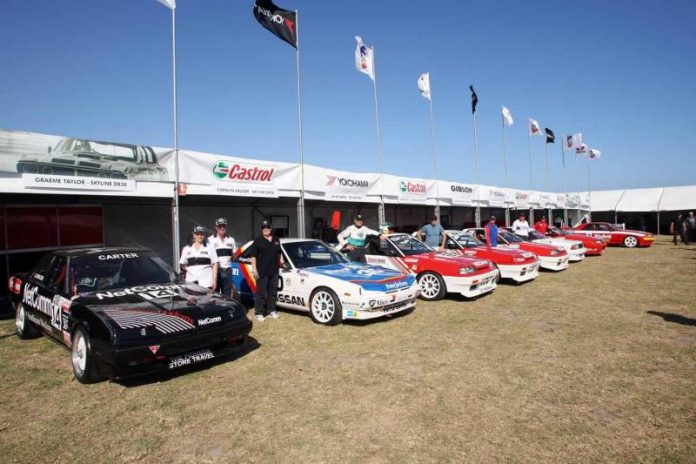 FIRST anniversaries are always a cause for celebration. For the resurgent Gibson Motorsport (GMS) team, it was extra special — and the awe-inspiring Phillip Island circuit would provide the scene for a massive anniversary weekend.

In fact the weekend meeting of 7 – 9 March showcased the largest number of Nissan Motorsport cars together at the ‘Island.

Gibson Motorsport’s Paul Beranger summed it up perfectly: “It was a huge anniversary weekend for the GMS team and car owners, with eight Nissan race cars represented either on-track or on static display. Our marquee included a range of memorabilia and corporate hospitality, as well as space for fans to watch the race cars being prepared for action.”

“Mr Tim Murata, Managing Director of Yokohama Tyre Australia also attended with a group of Yokohama’s Victorian dealers. And Lindsay Fox, owner of the 1992 Winfield GT-R, dropped by our garage and was very encouraging with his comments regarding GMS’s period style presentation.”

Of course, the Phillip Island Classic is about the fans, and they were also well served. Fred Gibson, along with star driver Jim Richards, mingled with fans over both days and attended several autograph sessions during the meeting.

Two significant racecars were on static display throughout the Phillip Island Classic weekend. The Fox Collection’s GMS Nissan R32 Winfield GT-R, which won the last period Group A race at the 1992 Adelaide Grand Prix — has recently emerged from hibernation and is now entrusted to GMS for display at historic motorsport events. It was a crowd favourite throughout the weekend.

A blast from the past for Group A race fans was the return to Phillip Island of the ex-Murray Carter NetComm Nissan DR30 Skyline, on display under the watchful eye of owners Graeme and Jacqueline Taylor. Following a detailed nut and bolt restoration the Taylors have recently handed the Skyline over to GMS for final preparation, prior to it debuting on the race track later this year.

As ever, the track action was frenetic. Jim Richards qualified his 1990 ATCC-winning HR31 Nissan Skyline on pole position for the combined Group A/C Touring Car category before taking two second places and a third. Given he was up against newer machinery, including Terry Lawlor’s recently-acquired Nissan R32 GIO GT-R, his results were highly impressive.

Terry’s efforts in the GT-R were rewarded with three wins from three starts, a significant first up personal achievement in this complex car.

Carey McMahon joined the Gibson Motorsport garage for the first time and had the advantage of accessing Gibson’s original electrical guru Graham (Jackie) Stewart, who rectified a frustrating fuel pump pick up problem on his Nissan SVD HR31.

“Jackie’s knowledge of the original car was invaluable. We had recently been plagued by a misfiring engine and he had the problem identified and rectified within 15 minutes,” a grateful Carey explained.

The attention of Gibson Motorsport – and indeed the entire Heritage Touring Car field – now turns to the Sydney Retro Speedfest, to be held at Sydney Motorsport Park on May 3-4.