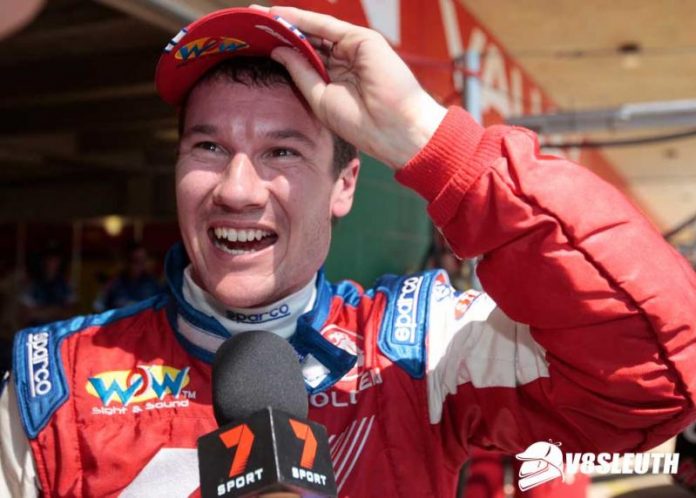 IT’S hard to believe that today – December 15 – marks the sixth anniversary of the passing of popular Supercars driver Jason Richards.

The Melbourne-based Kiwi had battled bravely with a rare form of cancer for over 12 months and his memory lives on today in the Supercars Championship via the Jason Richards Memorial Trophy awarded to the winner of the Pukekohe round.

A book was released celebrating Richards’ life after his passing and V8 Sleuth’s Aaron Noonan penned a chapter that was included within its pages.

Today we felt it timely to share this piece with you, which was originally written in October 2012.

“Ina former life I spent a fantastic two and a half years working as a media manager within Pemberton Publicity in Melbourne for Holden Motorsport.

For the 2005 V8 Supercar season I was given the role of looking after Tasman Motorsport and its Dodo-backed Commodore as it moved from Sydney to Melbourne and expanded to two cars with the arrival of a young Jamie Whincup to pair with foundation pilot Jason Richards.

In short, that season is one of the most memorable from my career for many reasons – but mainly because of Jason.

He drove me crazy by always being late to things and I quickly learnt to blatantly lie to him.

It was better to tell ‘JR’ a time 30 minutes earlier than you needed him because you knew he would be 30 minutes late – and thus right on time!

The team was a growing one that experienced plenty of highs and lows in that season.

I’ll always remember his wild ride at Queensland Raceway when Paul Morris tipped him into a series of barrel rolls on the exit of turn three.

I found him in the medical centre at the base of the control tower building on pit straight. He was woozy and had been on one heck of a wild ride.

He gave me a handful of quotes to take back to the media room but couldn’t help but ask: “Did it look good though?’

When Jamie and Jason paired up at Sandown and came home third to finish on the podium for the first time in their V8 Supercar careers – and for the first time for the Tasman team which had grown out of the old Lansvale Smash Repairs outfit – it was indeed special stuff.

While we all went out and drank and danced up a storm later that night, it was something JR did in the wake of that day that struck a chord with me – and still does to this day.

Post-race, he gave everyone in the team a bottle of bubbly (albeit cheap, no doubt that was being saved up for the first win!) with a personalised hand-written message in gold marker pen on the bottle thanking them for their efforts.

It said: ‘Aaron, cheers to your hard work.’

He’d even gone so far as to get printed up a new label for the bottle with a photo of the rain-soaked team celebrating the finish on the pit straight entitled ‘The First Taste’.

It was a very nice touch and showed how appreciative he was of everyone’s work in helping he and Jamie achieve that result.

A year or so later we took a road trip down to Avalon speedway near Geelong for JR to sample a Sprintcar.

Returning back to Melbourne we stopped in at my apartment of the time and he spotted the unopened bottle he had given me in the glass cabinet in my lounge.

He asked me why it was still unopened – he said he had bought it so people could enjoy the result and ‘taste’ of success.

I said I just didn’t reckon it was something I wanted to open. I wanted to leave it exactly as it was as a great memento of a great day.

I now see that bottle every day I walk into my office.

It sits in a massive glass cabinet among a range of model cars – including a #3 Richards Tasman/Dodo Commodore.

Initially it was a nice memento of a great race, result and day. But now it means so much more.

It takes pride of place in the V8 Sleuth office – it’s now much more than just a nice memento of that great day at Sandown – it’s a very special reminder of a very special guy.”