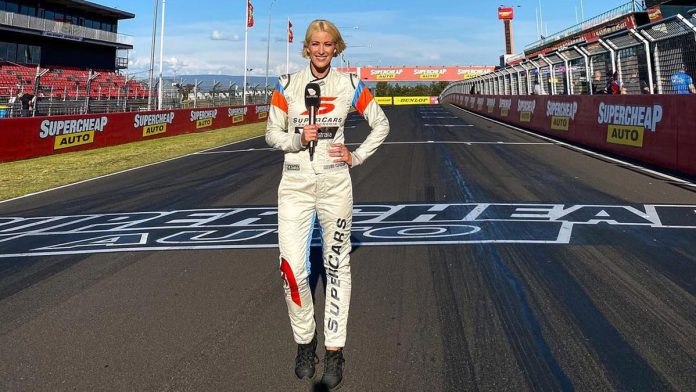 FORMER Supercars TV pit reporter Riana Crehan has picked up a new gig to return to motorsport television in 2021 – but with two-wheeled racing instead of four.

Crehan, who announced last December that she wouldn’t be returning to the Supercars Media-produced broadcasts this year, has signed a deal with Motorcycling Australia to host its Australian Superbike Championship and Motocross TV coverage.

Crehan replaces the departing Emma Notafrancesco, who has worked with the ASBK Series for the last four years in its TV broadcasts.

PODCAST: Hear Riana Crehan open up on her departure from Supercars TV

“For the last 10 or so years I’ve been involved in motorsport, mostly running up and down the pit lane with the Supercars, but now it’s time to have some fun with two wheels and the ASBK paddock.

“I’ve been sitting on the sidelines watching all the ASBK action unfold and now I can’t wait to be at Phillip Island for Round 1 of the mi-bike Motorcycle Insurance Australian Superbike Championship, presented by Motul, as part of the Australian All Wheels Race Fest, February 18 and 21.

“The 2021 ASBK is going to be spectacular and if fans can’t get trackside, you can catch all the action through our ASBK TV partners and ASBK TV Live Stream.

“I’ve been a fan of two-wheels for a long time. I’ve known a few of the guys and girls in the ASBK paddock for a long time including Wayne Maxwell who is friends with my husband, and Troy Herfoss, who I have followed closely due to his off-track training.

“It’s great to see Brent Stephens (former MotoGP crew member for Valentino Rossi) join the paddock as a mechanic, as I’ve known him for a long time and it’s great to have some familiar faces in the pit lane this year.”

A winner of the Miss V8 Supercars competition in 2005 and now wife of Shell V-Power Racing Team Supercars driver Will Davison, Crehan moved into broadcasting with Supercars in 2007, initially on the bigscreen coverage.

She eventually graduated to be part of the television broadcasts themselves, sharing pitlane duties with the likes of Mark Larkham and Greg Murphy.

Crehan only appeared at occasional events last year amid cuts due to the COVID-19 pandemic and Bathurst 2020 was her swansong.