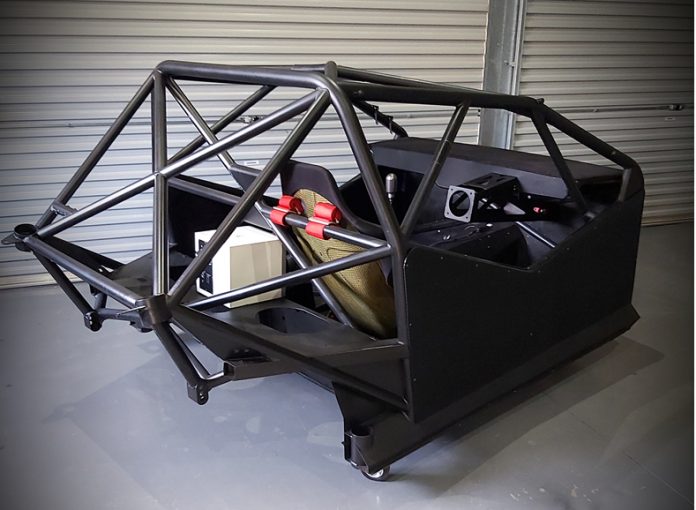 A DESTROYED V8 Supercar race chassis that featured in one of the biggest crashes in Supercars history is being reborn by a Brad Jones Racing team engineer as a simulator!

BJR engineer Tony Woodward has been busy over the COVID:19 enforced suspension of the Virgin Australia Supercars Championship with the long-term project in Albury.

With work hours cut back to three days per week in the team’s workshop, Woodward – whose regular role is as race engineer for Todd Hazelwood on the team’s #14 Commodore ZB – has had more time to invest in the long term project that had already been started long before the championship’s unplanned pause.

He’s in the process of taking the chassis that Hazelwood barrel-rolled at Sandown in 2017 – which was damaged beyond repair in terms of racing duties – and turning it into a simulator!

The chassis was stripped in the aftermath of the crash and all of the salvageable parts went straight into the new chassis built up for the next race at Bathurst.

“It sat around for a few years and I had actually got another chassis I was going to convert but Brad (Jones) decided he may want to rebuild it at some point so we did a swap and I ended up with BJR 005,” Woodward told v8sleuth.com.au.

Prior to its demolition day at Sandown in 2017 the chassis had been raced by Fabian Coulthard as the Freightliner car from its debut at Hidden Valley in 2015 to the end of that season, including finishing fourth at Bathurst with Luke Youlden co-driving.

It then became Tim Blanchard’s CoolDrive car for 2016 and 2017 before its untimely retirement from racing after the Sandown crash with Hazelwood at the wheel.

A wide range of the highly successful VF Commodore Supercars feature in our new V8 Sleuth-published book, ‘Racing The Lion’, a 400 page illustrated history of Holden in motorsport.

At 400 pages and packed with photos never before published, it’s the perfect collector’s piece and can be pre-ordered here now.

“There was no chance of it being used for anything again,” Woodward says.

“The main chassis is not that bad from the crash, but there’s one small kink in the main hoop though that is essentially irreplaceable, so I’ve cut the chassis off at the front firewall and at the rear strut towers where the dampers connect. It’s basically a full chassis minus the engine compartment.

“It won’t be a cheap thing to do but it’s going to be a cool piece of kit. When people sit in simulators, they say ‘it’s just like a race car’, but this will actually be a race car!”

Woodward started work on the project in 2018 but the busy nature of working and racing with BJR meant progress had slowed. While having some time now is handy, there’s a range of other hurdles to be jumped.

“The drama is a lot of the standard sim stuff won’t fit in it as they’re designed to fit generic rigs, not an actual race chassis! So I’m basically designing and building things from the ground up, for example, a new custom-made pedal box.”

He says that he’s ear-marked Hazelwood to turn the first laps when it’s finished.

“Todd and I joke about it –  that crash put us all through all that workload (to build a new car) but I ended up with a race car out of it so it wasn’t that bad!”

Woodward is keen to use the simulator for driver training, both with BJR and other clients. He’s also looking for some assistance with the motion system.

“It’s in the shed at home and won’t fit in the garage by the time I’ve finished it!” he says.

“I am keen to do a bit of driver training stuff on the side with it once it gets going and the BJR guys are keen to use it because eventually I plan on having it as a full motion sim, a bit of a level up from what they’ve all got at home.

“I want to make it as realistic as possible, I’ll modify all the standard game settings to correlate with real car data.”

And in a nice touch, he’s also resurrected the steering wheel from the crash chassis too.

“I’ve resurrected it as a sim wheel, it’s a replica of what’s in the real car, but just modified to work with the computer rather than an ECU. I’ve tried to use as many components from the real thing I could get my hands on.”

Woodward has also developed his own hydraulic simulator pedal set that is currently in testing and development with plans for eventual commercial sale.

The chassis his sim is based on is one of one of 12 Car of the Future era cars that have been built by Brad Jones Racing.