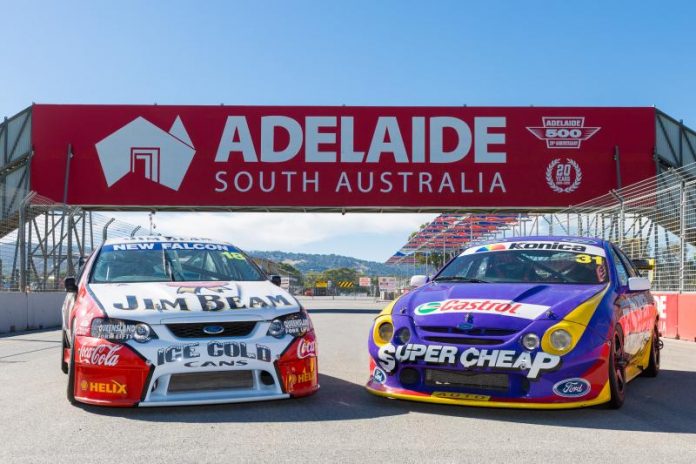 THE 20th year of the Adelaide 500 Supercars street event will be celebrated this March with a special collection of historic race cars being gathered for the milestone occasion.

To celebrate 20 years, the V8 Sleuth team – in conjunction with Adelaide 500 organisers – is putting together a major attraction of 20 cars with the intent to include one car from each year of the event’s history since it began in 1999.

A selection of the 20 cars will be participating in spirited laps of the famous circuit on the Friday, Saturday and Sunday of the event.

Read the history of this car and every other Supercar Falcon in our ‘The Falcon Files’ publication available here via the V8 Sleuth Online Store.

It’s the car he used to take his maiden Supercars race win at Eastern Creek in March 2008.

“The Adelaide 500 has been an integral part of the Supercars Championship and my career for many years,” said Davison, who was in Adelaide today for the announcement of the car collection.

“It’s an incredible circuit and has seen some dramatic races over the years. Bringing this collection of cars together is an excellent way to celebrate the 20th anniversary and I have no doubt that the fans will love it. I can’t wait to get involved.”

Further announcement regarding other cars that will be joining the one-off special tribute collection will be announced in coming weeks ahead of the March 1-4 event.

If you have a car you think the V8 Sleuth team needs to know about, either for the 2018 Adelaide 500 or otherwise, email us here.