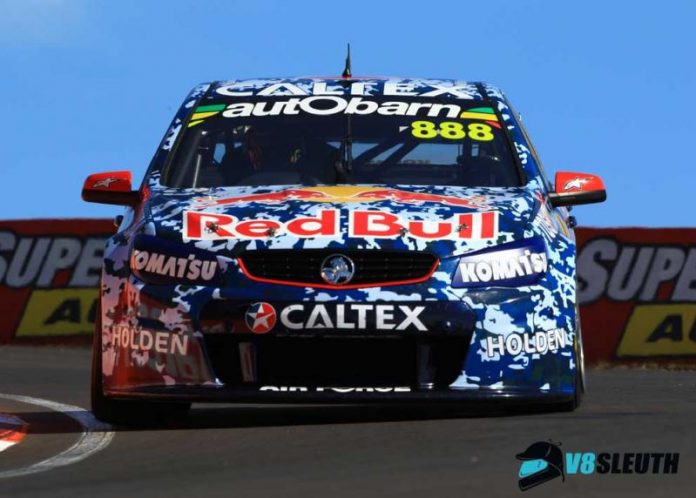 The Kostecki cousins have a Triple Eight car being converted to ZB Commodore spec, but what is it and where has it been?

RECENTLY it was announced that Kostecki Brothers Racing will run a wildcard entry in this year’s Pirtek Enduro Cup at Bathurst, Gold Coast and Sandown.

Cousins Brodie and Jake Kostecki, who are regularly teammates for KBR in the Dunlop Super2 Series, will link up to make their ‘main game’ debuts at the Supercheap Auto Bathurst 1000 in October.

They’ll be at the wheel of the car that Brodie has started this year’s Dunlop Super2 Series in, which is currently being converted from VF to ZB specifications for the enduro races.

That particular chassis – 888A-039 – is one with plenty of interesting history, so we thought we’d give you a brief overview of its racing career history.

It was built new as a VF Commodore by Triple Eight Race Engineering and debuted by Craig Lowndes and Steve Richards in Red Bull colours at Sandown in 2014.

This car ran in the special Navy livery at Bathurst that year and was cannoned into by the brakeless Warren Luff at Griffins Bend in Saturday practice, though repaired for race day.

Lowndes raced this chassis for the remainder of the 2014 season, though it was benched in 2015 to be repaired in the wake of a crash in qualifying at Sydney Olympic Park late the season before.

It sat on the sidelines for the entire season and was sold to Kostecki Brothers Racing for Kurt Kostecki to drive in the 2016 Dunlop Series.

It was re-liveried to Preston Hire colours mid-way through that year and leased for Townsville and Ipswich by Charlie Schwekolt’s team (with Kostecki at the wheel and Team 18’s mechanicals installed) in the wake of Team 18’s regular car being smashed in an accident in Darwin that injured Lee Holdsworth.

Kostecki again raced the car in the 2017 Dunlop Super2 Series before brother Jake raced it in 2018 and the first two rounds of this year in Adelaide and at Barbagallo.

Uniquely, this car has only competed in one Bathurst 1000 – back in 2014 with Lowndes and Richards, when it finished 10th after Lowndes received a late race pit lane penalty for bumping Mark Winterbottom into a spin on the exit of Hell Corner.

Jake will move into the chassis that Brodie has been racing for the next Super2 round in Townsville next month.

Make sure you swat up for the Supercheap Auto Bathurst 1000 by getting your copy of the Official Annual of the 2018 Great Race.

Order it via our V8 Sleuth Online Store here.