Home News WHATEVER HAPPENED TO THE BUD MUSTANG? 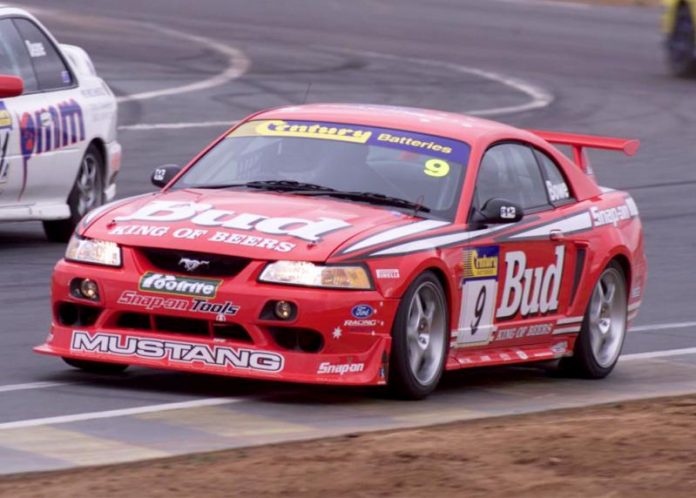 HERE at V8 Sleuth HQ we often question what happened to some of the ‘forgotten’ cars that raced in our very own backyard – from the one offs to the specials built for a specific series there have been many unique and interesting cars raced over the decades.

With the recent announcement that the Mustang will return to Australian racing in 2019 in the Supercars Championship we thought it timely to look back at the car that reintroduced the Mustang badge to Australia nearly two decades ago – John Bowe’s Bud Mustang Cobra RA.

Our interest in this car was recently ignited when a photo of what appeared to be a GT-P Bud Mustang were published in the latest issue of Australian Muscle Car Magazine, courtesy of a letter from AMC reader Steve Dangerfield.

The pictures showed an almost bare shell sitting in the corner of an old shed, with Dangerfield explaining that he came across the pony car in rural South Australia – reportedly the current owner has plans to turn it into a drag car.

Do you know some more about this car? Or indeed have any insights from its period racing history? Contact us here or via our Facebook page.

The bright red Mustang burst onto the Australian scene in 2001 courtesy of Prancing Horse Racing and made competed in the PROCAR-run GT Performance Championship with Bowe at the wheel.

The American-built beast made waves by claiming pole and a race victory on its first weekend of competition at Wakefield Park before becoming a point of controversy in the production car scene.

We recall this car made spasmodic appearances in the remainder of the 2001 season including the Sandown 500 where it was lumped with a performance handicap in the lead-up and driven by PROCAR chief Ross Palmer and David Wood instead of Bowe – who drove a Ferrari with Tom Waring and won the race.

Bowe and Kiwi Chris Dunn ran the Bud Ford in the Bathurst GT-P Showroom Showdown and from there we have recollections that this car – and perhaps another – ran in Group Two of Nations Cup before PROCAR Australia folded at the end of 2004.

We’d love to know more about this cool piece of Australian motorsport history.