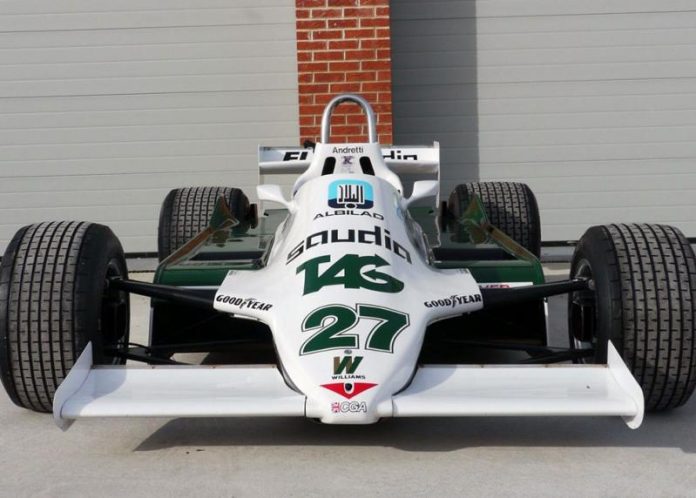 The car was raced by three motorsport legends, including our last F1 champ…

THE car that Alan Jones drove to his final Formula 1 Grand Prix win has come onto the market overseas.

Jones claimed victory in the 1980 world championship, earning the right to carry the #1 into the 1981 season aboard the final version of the Ford Cosworth-powered Williams FW07 that had earnt him his title.

The FW07 first appeared in 1979, evolving through FW07B, C and D spec (the latter a six-wheeled version that only appeared in testing) before it was replaced by the FW08 early in the 1982 season.

Chassis 16 was the penultimate FW07 chassis built, and became Jones’ car for the last half of the 1981 season – at the end of which he would announce his retirement.

While Jones was unable to repeat his championship win of 1980 it wasn’t through a lack of trying, with mechanical problems and mistakes costing him potential victories throughout the season.

An example was FW07C chassis 16’s debut at Hockenheim for the German GP: Jones led handily until afflicted by a misfire, a late pit stop failing to rectify the problem and leaving him 11th at the flag.

Jones claimed three podium finishes before the season was out, including an emphatic victory in the season finale in Las Vegas on a circuit laid out in the Caesar’s Palace casino car park.

His victory began a long drought for Australians in F1;almost three decades would pass before Mark Webber claimed his first F1 win in 2009.

It was relatively common practice for teams to start a season campaigning year-old cars in the early-season races overseas before debuting their new machinery when the championship arrived in Europe.

Williams did so in 1982, with FW07C chassis 16 taking part in the first three races of the season before being pensioned off.

Carlos Reutemann took part in the final races of his decorated F1 career aboard the car, finishing second in South Africa and crashing out in Brazil before abruptly announcing his retirement from the sport.

In a one-off start for Williams, Mario Andretti gave FW07C chassis 16 its final race start at Long Beach before the FW08 came on-stream as the championship arrived in Europe.

After being retained for a couple of years, chassis 16 was one of three FW07 chassis sold by Williams to Jacques Setton – a French electronics millionaire who amassed an extensive collection of classic road and race machinery.

The Williams was sold in 2000 to American Roy Walzer, who returned the car to competition in the booming historic F1 category. The car has since been campaigned by its current owner in the FIA Masters Historic Formula One Championship in recent years.