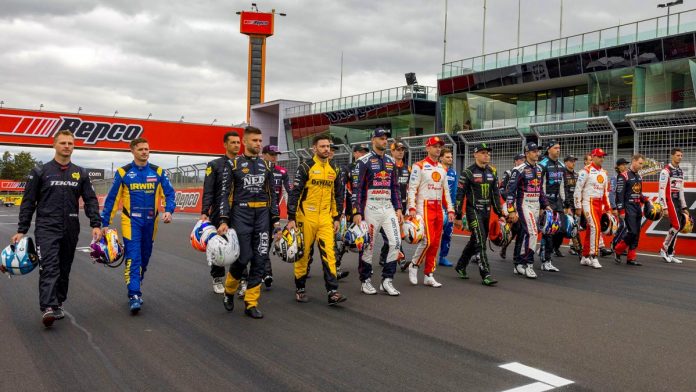 A FIELD of 25 Supercars will pursue victory in the 2021 Repco Bathurst 1000 at Mount Panorama.

In addition to the 24 regular full-time entries, one Wildcard entry will join the grid in the shape of the Triple Eight-run Holden for Broc Feeney and Russell Ingall.

Holden, in its first ‘Great Race’ since the marque’s retirement at the end of last year, once again has the lion’s share of the grid with 17 ZB Commodores on the entry list while eight Ford Mustang GTs will line up for the race start.

SPOTTER GUIDE: The livery of every car in the 2021 Repco Bathurst 1000

Just one previous Bathurst 1000-winning chassis will be on the grid for the 2021 race, while seven cars will make their ‘Great Race’ debut.

Only two of the driving combinations of last year’s race have remained together for 2021, comprising the two lead Triple Eight entries for reigning victors Shane van Gisbergen and Garth Tander, and Jamie Whincup and Craig Lowndes, the former adopting the team’s traditional #888 while the latter retains Whincup’s usual #88.

The quartet represent four of the 12 drivers in this year’s field who are previous winners of the race, while this year sees 2017 winning drivers David Reynolds and Luke Youlden reunited at Kelly Grove Racing.

This year’s event will take place with a substantial trackside crowd following the capped numbers last year due to the COVID-19 global pandemic, but lingering travel restrictions have prevented some drivers from taking part.

Alexandre Prémat was scheduled to drive for Tickford Racing but will once again miss out on returning to Mount Panorama for the first time since winning the race in 2019.

Just one rookie, Tickford Racing’s Zak Best, will start this year’s ‘Great Race’ marking the smallest intake of debutants since the inaugural running of the event at Mount Panorama in 1963.

The event will feature the biggest schedule of any Bathurst 1000 in history with support categories taking to the track from Tuesday onwards, however the Supercars will stick with their now-familiar four days of running.

This year’s pursuit of the Peter Brock Trophy gets underway on Thursday 2 December with the opening Supercars practice sessions at Mount Panorama.