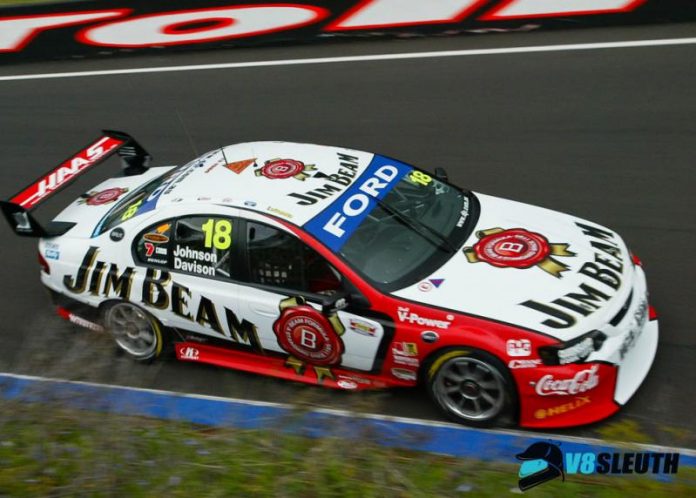 A FORMER Jim Beam Dick Johnson Racing Falcon is the latest car confirmed for the ‘farewell to Falcon’ display at next week’s Supercheap Auto Bathurst 1000.

A unique collection of Ford Falcon race cars spanning the history of the famous Australian nameplate will be part of this year’s event.

Located in Mount Panorama’s paddock area, the display will celebrate the final Bathurst 1000 for Ford’s iconic Falcon model, bringing together a collection of Falcons spanning the 1960s, 70s, 80s, 90s and 2000s.

The Jim Beam Falcon confirmed for the display is the car Will Davison used to win his first Supercars race and round at Eastern Creek in 2008 – ending a seven-year winning drought for the famous team.

Read all about the history of this chassis and more than 100 other Falcon V8 Supercars in our special magazine ‘The Falcon Files’ – order it now from our Online Store.

Prior to its first win, this car was originally built as a BA model ahead of the 2005 season and debuted in Westpoint colours with Glenn Seton behind the wheel at the season-opening Adelaide 500.

The two-time Australian Touring Car Champion took a best result of fourth at Hidden Valley aboard the Falcon during his only season with DJR and his last as a full-time driver.

Davison joined the squad full-time in 2006 and campaigned this car for the full season (bar the enduros where it was handed over to his brother Alex and Grant Denyer) before it was upgraded to BF specification and re-appeared in Jim Beam colours for 2007.

The team enjoyed an upward swing during the ’07 season, though really hit its strides in ’08 when Davison scored his breakthrough victory, followed by another race win at Winton later in the year.

Current owner and Preston Hire Racing team owner, Charlie Schwerkolt, has retained the car ever since 2010, displaying it at his Supercars team workshop in Melbourne.

The DJR Falcon made an appearance earlier this year at the Adelaide 500 as part of a display celebrating 20 years of the South Australian event that also saw the Falcon complete demonstration laps of the parklands circuit with Matthew Brabham at the wheel.

The V8 Sleuth team has worked with Supercars again this year to bring together the ‘farewell Falcon’ display.

This year is the fourth year in a row that V8 Sleuth has been engaged by Supercars to identify, manage and procure a range of cars for display at the October classic.

It began in 2015 with a celebration of motorsport to mark the Bicentenary of the City of Bathurst, was followed in 2016 with a collection of Peter Brock cars to mark the 10th anniversary of his passing and was continued last year with cars of drivers inducted into the new Bathurst ‘Legends Lane’.