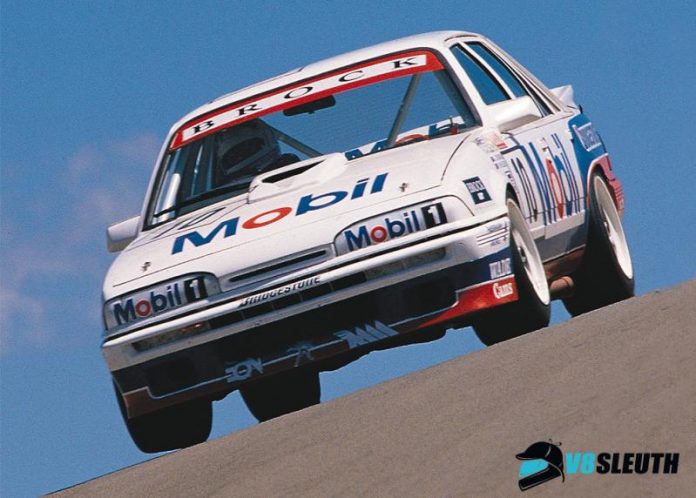 THE car Peter Brock drove to his final Bathurst 1000 victory has a new home in the United States.

Expat Australian businessman Kenny Habul has purchased the car for an undisclosed amount, the 1987 #10 Mobil HDT Holden Commodore VL SS Group A now residing at the headquarters of his SunEnergy1 company in Mooresville, North Carolina.

Habul, who finished second with Supercars champion Jamie Whincup and open wheel stars Rafaelle Marciello and Tristan Vautier in last weekend’s Liqui-Moly Bathurst 12 Hour, has a special connection with the car having played a small role in the Brock operation that weekend.

“I was 14, I was actually working with the team, just kind of helping on the side with Mort and all the guys,” Habul said.

“It’s amazing, you know. I just always looked at that thing, looked up at the podium and I’m really proud to own it now.

“It’s in my museum in North Carolina. And here I am, on the podium at Bathurst myself!”

The #10, HDT chassis 16 is one of the most unlikely winning cars in Great Race history.

Originally set to be crewed by Neil Crompton and then-reigning Australian Formula 2 champion Jon Crooke, Crompton was forced to step aside when he was unable to complete enough race meetings to qualify for his international race licence, with that year’s event part of the inaugural World Touring Car Championship.

A deal was done to bring Peter McLeod on board, and the veteran privateer had a near miss in the car during practice when the steering failed at the top of Mountain Straight, McLeod only just able to point the car into the narrow escape road.

#10 qualified down the grid and, with the cash-strapped HDT’s efforts focused on the #05 car of Brock and David Parsons, it was not expected to see the chequered flag.

Instead it became its leading hope when #05’s engine failed early in Parsons’ first stint, he and Brock taking over #10 after McLeod’s opening stint.

A trouble-free run, reliability problems and crashes that decimated all but the Eggenberger Sierras, plus a couple of memorable stints in the wet, and Brock, Parsons and McLeod took the chequered flag in third.

That soon became first when the Texaco cars were disqualified six weeks later for bodywork irregularities, Brock’s ninth and last Bathurst triumph made official in April 1988 when Eggenberger’s final appeal was dismissed.

By that point #10 was sitting in the Holden Dealer Team showroom with ‘For Sale’ signs in its windows, Brock having switched to BMW.

The Bathurst-winning car was purchased by motorsport journalist and publisher Chris Lambden, who raced the car in updated ‘Walkinshaw’ spec in a distinctive Beaurepaires livery from that year’s Sandown 500 until the Oran Park ATCC round the following year, where its rear was badly damaged in a crash.

Rebuilt and eventually returned to its 1987 guise, the car passed through several owners before it came into the hands of the Bowden family.

It was Paul Morris, a fellow Bathurst 1000 winner himself, who played a key role in the car’s sale to Habul.

“I said, ‘Paul, I really want that car’, and he knew where it was, and he knew the Bowdens and did the deal for me,” he said.

“I can’t tell you how proud I am. There’s just no amount of money I wouldn’t have spent to own it and I’m just really glad I got it.

“I’ve got some other special Brock Commodores and things in my museum, which remind me of my childhood.

“Now to finish on the podium at Bathurst myself, it’s kind of like coming full circle.”

#10 is the second Bathurst-winning Holden to head overseas in recent years, with the Holden Racing Team’s 2011 race-winning Commodore now in the hands of McLaren boss and Walkinshaw Andretti United co-owner Zak Brown.