Home News EXCERPT: ‘IT WAS A RUBBISH ACT’ 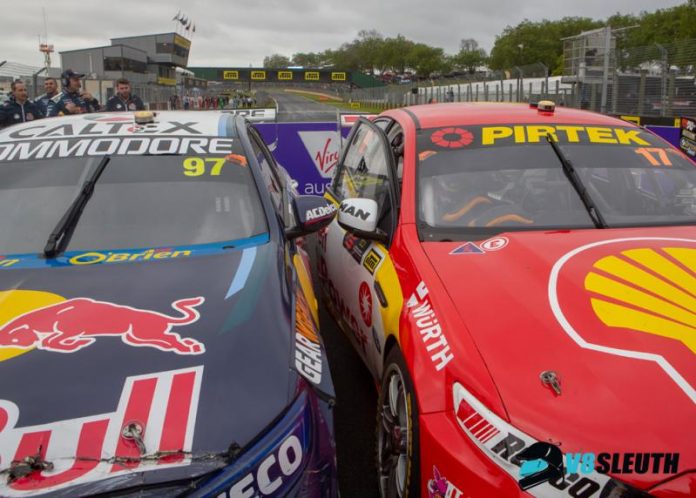 An excerpt from Road to Redemption: A Championship Journey, on sale now…

REIGNING champion Scott McLaughlin has released a book on the eve of the new Supercars season, and it gives an insight into just how heated his rivalry with Shane van Gisbergen became last year.

Working with FOX SPORTS AFL 360 producer and longtime friend Tim Hodges, Road to Redemption: A Championship Journey tells the inside story behind his successful 2018 campaign.

And McLaughlin doesn’t hold back, as evidenced by this excerpt from the chapter on last year’s ITM Auckland SuperSprint at Pukekohe…

FOUR races to go, and it was very cool to head back home to New Zealand for the penultimate weekend of the season at Pukekohe with so much on the line.

I was putting pressure on myself to be perfect across the weekend. Probably too much pressure.

Shane and I had a ripper race – one of the best, if not the best, for the year. I enjoyed it; it was good, hard and brutal racing. I put my hand up and say I blocked from very early on – there were three races to go after this one, my main title rival was behind me, and there was a massive home-town crowd, so of course I was going to make it as hard as hell for him to get in front of me.

I could tell Shane was getting frustrated and that’s when he hit me at the hairpin. It was a decent shove up my arse, but I was actually really surprised he got a penalty for it.

A five-second penalty made the margin between the two of us crucial at the end. He cleared the margin and won the race by a fraction, and I wasn’t upset with any of the racing that day – until we got to parc fermé.

I pulled into the correct position for finishing second and was about to get out of the car. That’s when Shane pulled in right beside me – leaving absolutely no room to get out. I was annoyed because it was uncalled for; it was a rubbish act of sportsmanship.

In some ways it was just immature on his part. I respect the guy, but that one moment made me want to beat him and his team more than ever.

He says it was a mistake, but I’m pretty sure everyone knows it wasn’t. He’s the most flamboyant guy on the grid. He can put his car centimetre perfect at over 200 kays an hour, so I’m not buying that he made a ‘mistake’ while parking.

And the funny thing was I was getting ready to get out of the car and shake his hand – that race was as good as it gets. It just put a sour taste in my mouth.

The taste didn’t improve when the pit lane investigation into Shane’s stop surfaced later that evening: he’d spun a wheel before his car was released.

I was annoyed because it clearly says in the rules that for safety reasons you can’t spin your wheels during a stop. And he spun his wheel. It’s right there in front of you on the television coverage.

It just added to a bloody frustrating evening. And I was pissed because if he had been penalised my championship lead would have topped 100 points.

After the Friday crash we were still chasing our tail on Saturday, and I knew we’d be better again on Sunday to have something to take to the Red Bulls.

I remember driving in to the track on Sunday morning: I was slapping the steering wheel of the rental car saying I was going to win. I’ve never been more motivated in my life.

We were all so pumped to stick it up Triple Eight, especially after the stewards’ finding. Everyone knew what the result should have been. Again it was me and them up the front – Jamie had pole, I was second, and Shane third.

I was so pumped to get the victory they never stood a chance. Perth earlier in the year was the greatest race of my life, but this without a shadow of a doubt, was the most important win of the season for me.

I’ve never celebrated more, I was so stoked to beat them. They gave us an upper cut on Saturday, and then we gave them one straight back on Sunday. For too long that team has had it their own way in the sport – I was thrilled we were the ones to take it up to them.

I was so proud of everyone, the way we all lifted – especially after the Friday accident. The intensified rivalry with Red Bull has galvanised us and drew us closer together.

The amazing scenes after the race had to be seen and heard to be believed. The cheers for me were awesome – what a thing to win like that in front of such a packed house.

But the boos that came for Shane were amazing – people had turned totally against him after the incident post-race on Saturday, and then Whincup slowing down to a stop on the final lap on Sunday to let Shane pass and grab second. The fans hated both moves, and they let both Red Bull drivers know about it.

You could tell Shane was rattled by his home fans’ jeering. This was his crowd as much as mine and they were turning on him – he’d become the villain.

I had to look away to hide the smirk on my face.

Click HERE to buy a copy of Road to Redemption: A Championship Journey