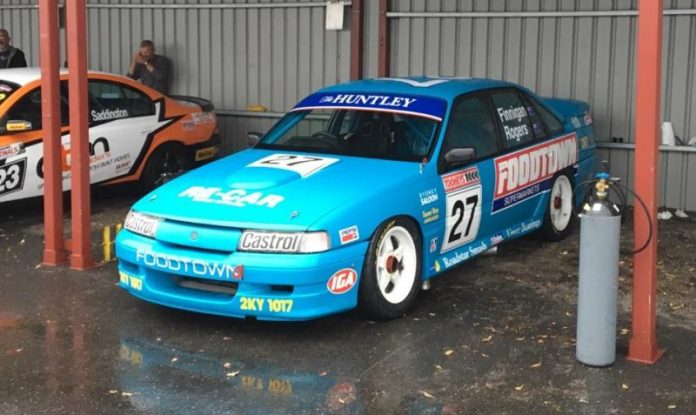 THE former Terry Finnigan Foodtown Holden Commodore Group A race car will make its long-awaited return to the race track this weekend as part of the Heritage Touring Cars field at Historic Sandown.

The car, converted back to VN from the VS specification it ended up in during its time racing in V8 Supercars, will be driven this weekend by David Holc.

Holc, a regular in the category over the years aboard his ex-GIO Commodore VL, gave the car a run at Sandown on Melbourne Cup Day (Tuesday) and is treating this weekend’s Sandown event as something of a shakedown run ahead of 2019.

The car last saw active competition in the V8 Supercar era at Bathurst in 2000 when it failed to qualify for the race in the hands of Kiwis Chris Butler and Miles Pope.

The privateer Holden enjoyed a very long racing life since it made its debut in Finnigan’s hands as a VN in the 1991 AMSCAR Series at Amaroo Park.

In fact, like many privateer teams of the era, Finnigan took the engine and running gear from his existing ‘Walkinshaw’ VL to fit to his VN, which ultimately was updated to a VP in 1993 and carried on racing in his hands through into the 1996 season with a striking silver and red Sony Autosound livery before he upgraded to a new VR Commodore in time for that year’s Bathurst race.

The car has been restored back to its 1992 Bathurst Foodtown #27 livery in VN Group A spec – in that particular race Finnigan teamed up with Garry Rogers to finish 13th overall in the rain-lashed event.

Our ‘Seven Sport Magic Moments of Motorsport’ DVD series has some races that feature this car in them, click here to check them out!

This weekend’s Historic Sandown will feature 12 different categories including the Heritage Touring Cars with a range of legends on hand – the event will also be the retirement race meeting for the great Alfredo Costanzo.

Gates will be open for free on Friday for practice with tickets on Saturday $35 and Sunday $45 with a two day pass $70 and children under 15 free if accompanied with an adult.