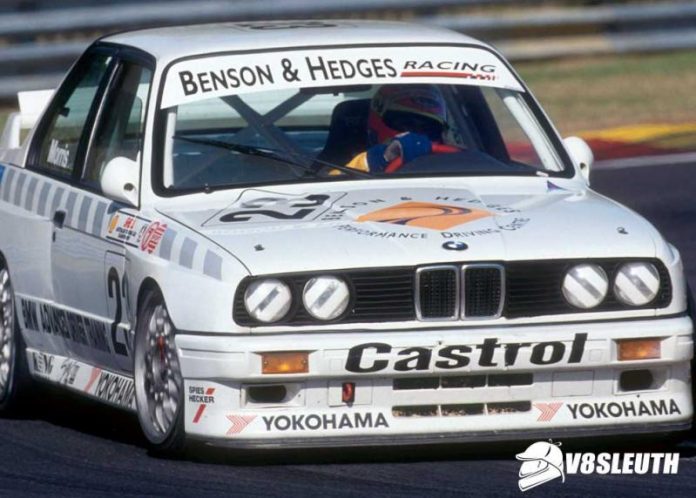 A FORGOTTEN BMW M3 Group A racing car that competed in Australia in the final year of Group A international regulations is slowly but surely being brought back to life.

The car, driven by Paul Morris as part of the three-car attack from the B & H BMW operation on the 1992 Shell Australian Touring Car Championship, was originally built by the Bigazzi team and has been acquired by former Seton Sierra owner Eddie Sansil.

Morris drove it in all nine rounds of the ’92 ATCC and finished ninth in the championship with a best round result of sixth at Lakeside and Oran Park.

He also competed in the entire ’92 AMSCAR Series at Amaroo Park in the white #23 BMW, finishing fifth in the points behind the Nissans of Jim Richards and Mark Skaife, the Sierra of Colin Bond and the B & H BMW of Tony Longhurst.

After a life that took it to Indonesia (pictured above) and the United States, this interesting M3 – used in ’91 and ’93 by the B & H BMW teamas a test car during its life in Australia – is being restored back to its ’92 Morris ATCC spec and livery and its owner intends to have it back on the track at marquee Historic events in future.

“It had a two-litre engine in it when I bought it but we’re going to put it back to 2.5-litre spec,” Sansil told V8 Sleuth this week.

“It also had a sequential gearbox in the car so we’ve converted that back to a H-pattern too. The car ran in a few different forms during its time in Indonesia, including as a drag car with a 2.7-litre engine!

“We’re restoring it back to its Australian livery from 1992 as Paul (Morris) drove it in the championship. It’s very tempting to run it in European spec; I have the original carbon bonnet and boot, but we’ll run it with the steel version as it ran to comply with Australian rules.

“We painted the outside of it late last week and hopefully we’ll be in a position in the next week or so to begin piecing it all back together again.

“Even though it raced as a two-litre car and in drags, the suspension and brakes were untouched and the car overall is unmolestered.”

Sansil is also working to try and document the car’s history with the Bigazzi team before it came to Australia in 1991.

“The first thing I did when I bought the car was to get a belt sander and take the paint off in the layers and see the history of the car from that perspective,” he says.

“I’m really interested to continue researching its history from the 1990 season prior to coming here.”