Home News FORMER PRIVATEER GETS BACK HIS OLD HOLDEN 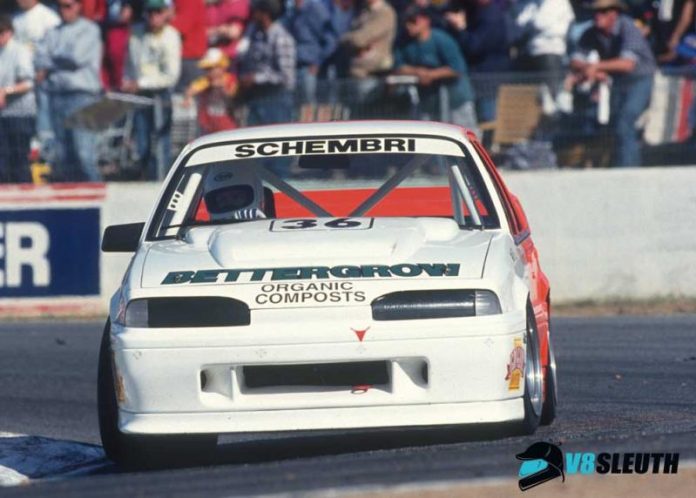 Neil Schembri to turn back clock with Commodore VL …

FORMER touring car privateer Neil Schembri has bought back one of his old cars.

The Sydney privateer, who made six Bathurst 1000 starts between 1994 and 2000, has re-acquired the VL model Commodore in which he made his touring car debut in 1993.

He then moved into a VP Commodore for 1994 that was built by Terry Finnigan using a lot of the running gear from the VL, which was later on-sold and has been through the hands of a few private owners since, though never returned to the track.

It has never been driven on a track since it was stripped for parts of Schembri’s VP, meaning it’s 26 years since it last hit the race track in anger!

The car is perhaps best known for being driven by visiting American John Andretti in 1988 when he co-drove with Rogers in the Tooheys 1000 at Bathurst.

Rogers ran the car in a handful of events in 1989 and at Bathurst in 1990 with Graham Moore, though clutch failure forced them to retire on the first lap of the race.

Buy our ‘Holden at Bathurst, 1963-2017’ limited edition hardcover book here – it has photos of this car during its Bathurst 1000 life as well as all other Holdens to compete in the race during that period.

The car has been restored to 1990 Bathurst Rogers/Moore Valvoline livery with all sign writing hand-painted as per period.

A CAMS Certificate of Description has been applied for, meaning once approved and completed the car will be eligible to compete in Heritage Touring Cars for Historic Group A and C touring cars.