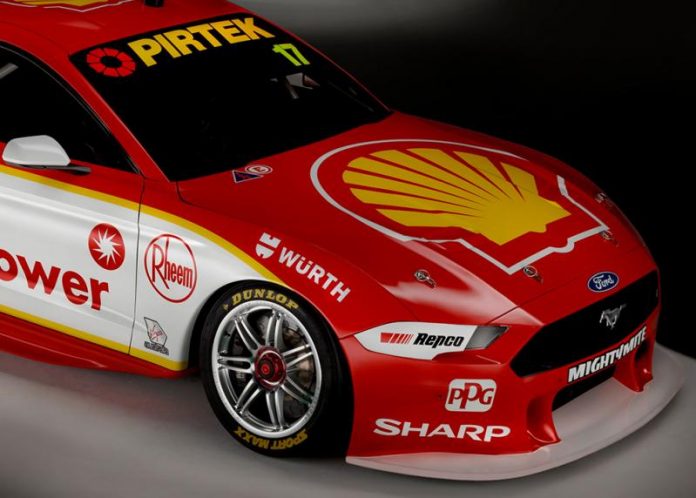 DJR Team Penske has revealed its livery its new Shell V-Power-backed Ford Mustang GTs will carry in the 2019 Supercars Championship.

The cars were uncovered on Monday at The Timber Yard in Port Melbourne, with reigning champion Scott McLaughlin, teammate Fabian Coulthard and team co-owner Dick Johnson doing the honours, all three taking part in a special video that preceded the unveiling.

The new Supercars-spec Mustang has been jointly developed by Ford Performance, Ford’s Asia-Pacific Design Studio and DJR Team Penske – Ford’s homologation team for Supercars – resulting in the first new Ford Supercar to be developed from scratch in almost a decade.

“We have worked tirelessly on the Mustang program over the last 12 months, and to get to this point, where we are revealing it in Shell V-Power colours is massively satisfying, and really get the blood pumping for the year ahead,” DJRTP team principal Ryan Story said.

“We’re ecstatic with how the car has come together, and how it looks in our 2019 warpaint. We’ve brought on some fantastic new partners and are hopeful of continuing the success we’ve enjoyed in recent years.”

McLaughlin heads into the season as reigning champion, but will stick with Johnson’s legendary #17 on his brand new steed instead of adopting the title-winner’s #1.

“We’ve spent a lot of time developing this new car, and to now see it in Shell V-Power colours is awesome,” McLaughlin said.

“It looks fast standing still, so I can’t wait to see how it performs on the streets of Adelaide in a couple of weeks.”

Coulthard is similarly excited for the season to get underway and see how the Mustang shapes up against its opposition.

“I’ve been around the sport for a long time now, and I can’t remember a build-up to a season as big as this,” Coulthard said. “We’ve got a fantastic new car, and I can’t wait to get behind the wheel.”

The cars retain a similar design to that used on the team’s Falcon FG X racecars, with Coulthard’s retaining yellow accents on its mirrors and bumpers to help easily tell their two cars apart.

The team also confirmed it will roll into the 2019 Pirtek Enduro Cup with an unchanged co-driver lineup, with Alex Premat sharing the #17 Mustang with McLaughlin and Tony D’Alberto partnering Coulthard in the #12.

Part of the launch saw the official launch of the new Shell V-Power Racing Team app, allowing fans to access Shell fuel discounts whenever the team wins races, along with updates and information around each Supercars event.

The cars will hit the track in their new colours for the first time at Phillip Island on Thursday at Supercars’ official pre-season test day, ahead of the opening round of the 2019 championship at the Superloop Adelaide 500 at the end of the month.