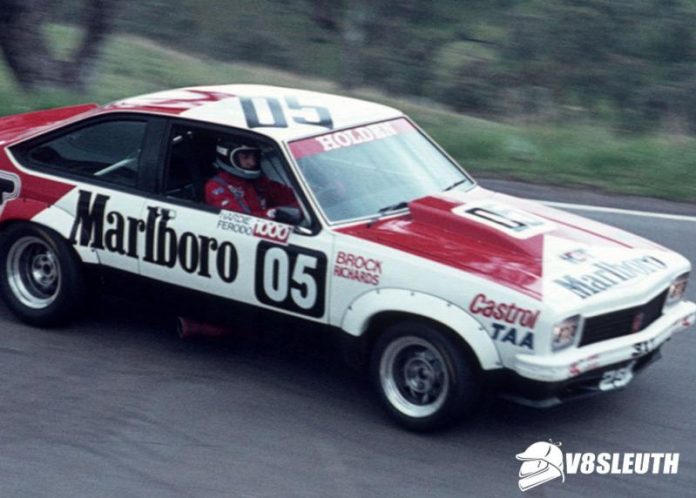 OF his nine famous wins in the Bathurst 500/1000, Peter Brock scored all bar two of them as a factory Holden driver.

The sight of his #05 Torana or Commodore claiming the chequered flag was commonplace in the late 1970s and early 1980s as he grew further and further as a household name.

Brock was in fact quoted in 1980 as saying of his 1978 Bathurst winner: “A taut, muscley little car with heaps of urge and good brakes, bumpy through the corners like a sports car, in fact a pretty exciting thing.”

And just over four decades on, it’s hard to find another way to describe it any other way.

In fact, they came in two separate, albeit similar looking, HDT A9X Toranas.

Not only did the 1978 Bathurst winner claim ‘The Great Race’ but it scored a Sandown endurance crown that year as well as numerous Australian Touring Car Championship round wins and endurance round victories as well.

Its results sheet is in fact far more impressive than the 1979 car, which had a brief competition life and the romantic notion of a six-lap Mountain victory to help cement its place in history.

The ’78 winner made its debut in the non-championship Rothmans 500 endurance race at Oran Park in June 1978 and Brock drove it for the remainder of the sprint race-based ATCC season, claiming his second of three touring car titles with a third-place in the final round at Adelaide International Raceway.

From there, Brock’s #05 was very much into endurance mode and went on a tear. He led home Harvey in a 1-2 form finish to claim the second round of the endurance championship at the Hang Ten 400 at Sandown and then he and Richards went to Bathurst as one of the big favourites for The Great Race.

They didn’t disappoint as Brock put #05 on pole position (for the first time in the history of the race in the Top 10 Shootout then known as ‘Hardies Heroes’), clocking a lap eight-tenths faster than Colin Bond’s Falcon Cobra.

He and Richards were largely untroubled and claimed victory in the 163-lap classic, giving the quiet Kiwi his first Bathurst victory in his first appearance at the Mountain with the MHDT.

It was also revenge for Holden after the drubbing at the hands of the Moffat Ford Dealer Falcons and the famous 1-2 form finish the previous year.

While one race win wouldn’t erase the burning imprint that victory had on the General, it opened the flood gates to six wins from seven starts for Brock, HDT and Holden from 1978 to 1984.

Pole position at the Adelaide endurance round again proved the #05 Torana had more winning potential left in it, but Brock was forced to settle for second to Colin Bond’s speedy Cobra after a pit stop near three-quarter distance due to tyre problems.

The Bathurst-winning Torana bounced back to win the 300-kilometre endurance round at Surfers Paradise, Brock leading all but three of the 95 laps on his way to victory.

That was Brock’s final race in the car, which became John Harvey’s vehicle for the 1979 season and won the first round of the championship in Tasmania in his hands.

Harvey ran the car for the rest of the touring car title and shared it with Ron Harrop at Bathurst, only to have his co-driver crash with no brakes at turn two, Griffins Bend.

It was a massive shunt, the A9X sliding sideways into the concrete barrier and leaping straight over it, crashing to a rest outside the circuit’s perimeter with its pilot amazingly OK!

Thought to be a write-off, eventually prestige car repairer Jim Shepherd saw the importance of the car and didn’t want to see it reduced to scrap metal, so the body shell was given to him to restore provided he bought the panels, made the repairs and obtained what parts he could from time to time from the Holden Dealer Team.

A reported 544 man-hours went into bringing the 1978 Bathurst winner back to life and she returned to the track at the 1980 Hang Ten 400 meeting at Sandown.

With touring car racing having moved on to Commodore and four-door Falcons in the time she had been away, the A9X was entered in the supporting Sports Sedan events with 1979 pilot Harvey driving.

It has been through the hands of a range of private owners over the years with its ownership passing to Sunshine Coast car collector David Bowden in 1999 – the car has been part of his collection ever since.

The Torana today sits in 1978 colours as applied by Shepherd in 1980 but is in 1979-spec mechanically, including the exhaust being out the passenger’s side rather than the driver’s as well as upgraded suspension and brakes.

The red, white and black beast made a trip to England in 2007 – 12 months after Brock’s death – to take part in the Goodwood Festival of Speed, where ‘PB’ himself had competed in 2005 in Peter Champion’s ‘Big Banger’ VK Commodore.

With David Bowden’s son Dan at the helm, the car was a popular part of the activities.

And, for something really unique, Brock’s great rival Dick Johnson also got behind the wheel in 2011 at Bathurst for TV’s local version of ‘Top Gear’.