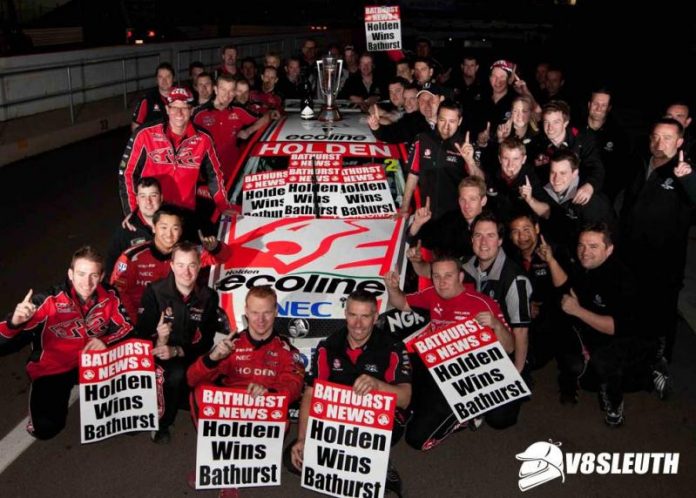 BATHURST-WINNING race cars are special and Holden Racing Team fans will be keen to know that the 2009 race-winning car is now being offered for sale by current owner and Queensland-based collector John Anderson.

The VE Commodore, driven to victory in both the ’09 Phillip Island 500 and Bathurst 1000 by Garth Tander and Will Davison, is being offered for sale along with the 2003 Kmart Bathurst-winning VY Commodore and the 1998 HRT Commodore VT that Craig Lowndes used to clinch his second V8 Supercar Championship.

The three are available to purchase as a collection or separately.

The ’09 HRT VE was in fact Mark Skaife’s last Holden Racing Team Commodore in 2008 before reverting to Davison’s hands for the 2009 season.

In addition to winning the endurance double that year it also took Davison to runner-up in the Driver’s Championship and helped the Walkinshaw-run squad claim that year’s Team’s Championship.

The chassis later raced in the Dunlop Series in the hands of Nick Percat and a few years ago was fully restored to its 2009 Bathurst-winning livery and specification.

HRT claimed seven Bathurst wins with six cars (Mark Skaife used the same car to win in 2001 and 2002) with just five of them left on Australian soil given the sale of the 2011 race-winning car to Zak Brown in recent times.

View the 2009 Bathurst-winning car’s ad on our Classifieds page here.

View the ‘Lap of the Gods’ car’s ad on our Classifieds page here.