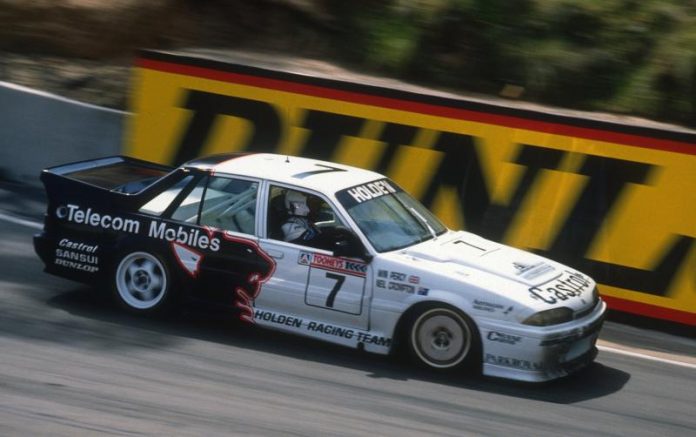 V8 SLEUTH has again partnered with Heritage Touring Cars in 2015 to look after the growing category in terms of its media management and content generation.

Last year a range of stories focusing on the histories of the Group A and C touring cars that make up the category were a great big hit – so we’re doing more this year with the first focusing on the ex-Holden Racing Team Commodore VL of Norm Mogg.

Norm’s Group A Commodore actually has a really interesting story, being one of the Tom Walkinshaw Racing Commodores put together in England and initially running as a blue and yellow Herbie Clips car in the UK.

It was flown out to Australia and finished seventh at Bathurst in 1989 in the hands of Win Percy and Neil Crompton and it’s this livery under which the car races today in HTC.

While the car ran under the Holden Racing Team banner at Bathurst that year, it was very much a Perkins Engineering-run car with Larry Perkins having been sub-contracted by Walkinshaw to run Holden’s racing program while Holden Special Vehicles was in its infancy.

Straight after Bathurst the car was sent to Indonesia to be raced by Indonesian prince Tommy Suharto before it returned to Australia in 1990 and was given an upgrade by Perkins Engineering, which included changing a range of things to make it more like a Perkins car.

Gone was the single centre lock wheel nuts used by TWR, replaced by Perkins’ familiar five-stud arrangement while a few further bars were added to the roll cage.

The Commodore was then purchased by John Lusty, who raced it at the Sandown 500, Tooheys 1000 (retiring after 66 laps with engine problems) and Nissan 500 at Eastern Creek alongside Bernie Stack.

Queenslander privateer Warren Jonsson was next to buy the car and competed in both Lakeside Australian Touring Car Championship rounds in 1991 before tackling the Tooheys 1000 at Bathurst with brother Graham as co-driver. The duo finished a very credible 11th overall.

The Commodore would make two more starts at Bathurst in Jonsson’s hands with the late Des Wall, finishing 16th in the rain-soaked 1992 race and 13th in 1993 after the car was re-liveried in green and yellow colours.

George Ayoub purchased the car in 1994 and raced it at the Sandown 500 and then Bathurst alongside Mike Conway and Kevin Heffernan, who had transferred into the Group Motor Sport entry after his Price Attack Commodore crashed and caught fire in practice.

The trio would be the last classified finisher at the 1994 Tooheys 1000 and finished 26th overall.

It was bought by Conway with parts from it to be used on an ex-Peter Brock Mobil VP he had also secured.

Mogg purchased the VL in the mid 1990s and has been racing it ever since.

To read the full, detailed version of the storyhead to the Heritage Touring Cars website here.