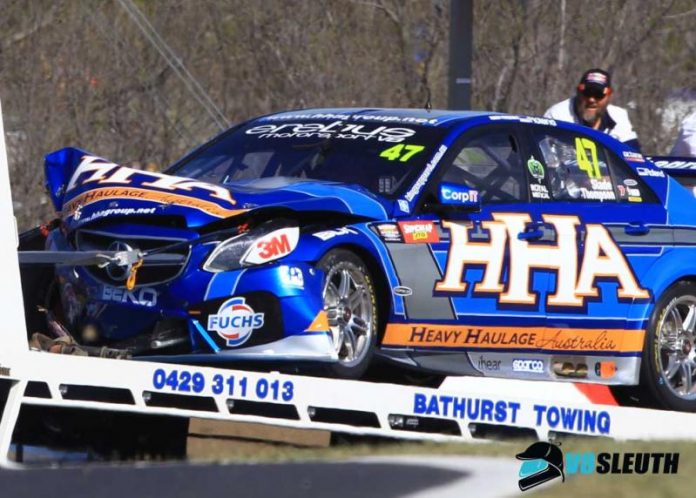 ALMOST three years to the day since its last race, ‘Loki’ is back on the track.

The third Mercedes-Benz E63 AMG built by Erebus Motorsport stretched its legs at Winton on Tuesday with David Reynolds and Luke Youlden at the wheel as part of an evaluation run ahead of a potential Super2 or main championship wildcard program for Youlden in 2019.

The car has not raced since the season finale at Homebush in 2015, the last event before Erebus parked its Mercedes in favour of Walkinshaw Racing-sourced Holdens, while moving the team’s operations from the Gold Coast to Melbourne.

STOCKTAKE SALE: Head to the V8 Sleuth Bookshop now for some fantastic bargains!

It was a stark contrast from the car’s unveiling, ‘Loki’ joining similarly mythological-named siblings ‘Thor’ and ‘Freyja’ on stage at Sydney’s Qudos Bank Arena in a lavish launch on Valentine’s Day, 2013.

The chassis was the 25thcar built by the team originally known as Stone Brothers Racing prior to its purchase by Betty Klimenko and rebranding as Erebus, the car carrying an SBR chassis designation alongside its Erebus number as a ‘dip of the lid’ to the team’s history.

The chassis was Tim Slade’s throughout the team’s trying debut season, managing a best qualifying performance of fourth at Queensland Raceway and a best race result of sixth at Hidden Valley.

The car was the focus of an intense repair during that year’s Supercheap Auto Bathurst 1000, Slade crashing the car at the Cutting in a 33G impact on Thursday afternoon. The crew rebuilt ‘Loki’ in 48 hours to have Slade out on track in time for Saturday morning’s final practice session, almost 20 hours sooner that initially forecast.

‘Loki’ became the team’s spare for 2014 following its down size from three cars to two during the off-season, before it was rebuilt at the end of the season and returned to the race fleet as Will Davison’s car #9 for 2015.

While the victory overshadows the car’s other results, Davison was a regular feature inside the top 10 early in 2015 aboard the car, qualifying fourth twice at Symmons Plains before being taken out in separate first-lap incidents.

The Tasmanian weekend was also notable for a guest driver: former Holden star turned commentator Greg Murphy tested the car for TV purposes on the Friday afternoon of the event.

2015 also marked the beginning of Erebus Motorsport’s relationship with Penrite Oils as a primary sponsor, their black and gold colours adorning car #9 at the Bathurst 1000 before adopting a retro 90th anniversary livery for the season finale at Homebush.

After that, the car sat at the Erebus workshop largely untouched for the next 36 months.

Along with primary drivers Slade and Davison, ‘Loki’ has also hosted Super2 champion Andrew Thompson, David Brabham and Alex Davison as Enduro Cup co-drivers, while this writer also enjoyed a hot lap in the car at Sydney Motorsport Park in August 2013 with Thompson at the wheel.

‘Loki’ was also one of the first Supercars that Jack Le Brocq, highest-finishing rookie in the 2018 Supercars Championship, drove as he looked to carve out a career in the championship.

Le Brocq, then an Erebus Academy member, piloted the car during a Driver Evaluation Day at Queensland Raceway in February 2014, with Lee Holdsworth turning the 10 laps allowed for a primary driver on the day.