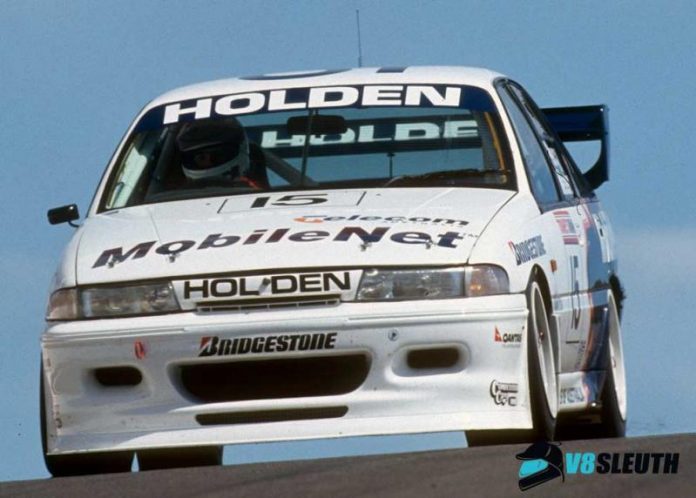 THE mystery of a missing Holden Racing Team Commodore race car, long thought to be lost to the ravages of racing and time, has been solved by the V8 Sleuth team.

The tale of one of the team’s VP Commodores from the early to mid 1990s, thought to have been possibly destroyed or missing has been solved via research undertaken for a new release, special edition hardcover book covering the histories of every single Holden Racing Team race car.

The book will be released in 2017 – pre orders for the individually numbered special edition copies will be taken later this year via the site’s online store.

To register your interest now though, email the V8 Sleuth team here.

The book, which is currently being compiled in depth by V8 Sleuth chief Aaron Noonan, will document the racing lives – and indeed the afterlives – of up to 50 race cars that have carried the famous ‘helmet and lion’ logo.

The histories of the HRT’s VN Group A Commodores that were converted into VPs and then raced under the early five-litre V8 rule book has always caused headaches for ‘sleuthers’ – until now.

“We absolutely have solved the mystery of the missing HRT Commodore – and where we have discovered it and how it came to be deemed ‘missing’ will be of real interest to HRT enthusiasts,” says author Noonan.

“Sometime ago we compiled a story on the V8 Supercars website relating to this car and we had absolutely no leads whatsoever, so it was felt we were really going to have a long-term headache.

“Buying the book will be the only way to read up on what happened to this previously-missing chassis, among all sorts of other nuggets of gold we have researched specifically for this project.

“A range of interesting pieces of information have come to light since we started really honing in on content for the book, all of which will make this publication a must-have for the book shelf or coffee table.

“We have unearthed a range of never-before-published photos, insights from drivers that tested and raced the cars and all sorts of details never before compiled in the one place.”

The hardcover book – with over 300 colour pages on premium print stock – will cover every HRT race car, ranging from the black and white VL Commodores of 1989/1990 right through to the current VF Commodores raced by Garth Tander and James Courtney.