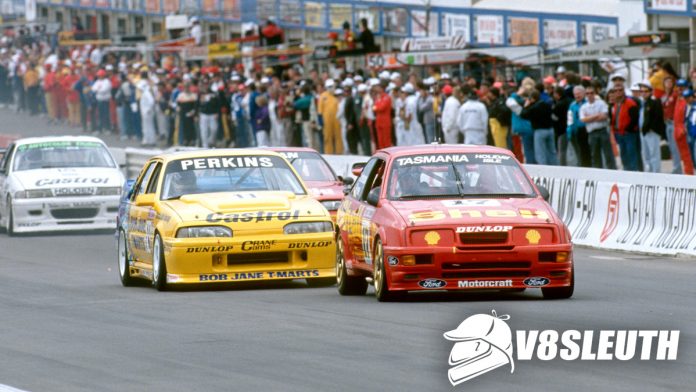 THE contents of the next series of ‘Seven Sport Magic Moments of Motorsport’ DVDs to be released to market this year has been announced.

The highly-popular DVD series that kicked off in 2012, has featured a wide range of motorsport content from the Seven Sport archives covering both Bathurst, the Australian Touring Car Championship and various support events.

More than 40 individual titles have been released over the last eight years.

Click here to order from the back catalogue of Seven Sport Magic Moments of Motorsport DVDs plus a plethora of other motorsport DVD titles.

One of the main features of the DVDs is inclusion of vision that wasn’t shown on the actual telecast day, specifically the racing vision missed by viewers ‘back in the day’ while they were watching commercials instead!

Six new titles will be released this year plus one under the ‘Classic Australian Motorsport’ banner.

The full race day telecast of the last Group A era Bathurst race won by our V8 Sleuth Podcast guests Jim Richards and Mark Skaife’s Nissan GT-R. Yep, it’s the one where Jim called everyone a ‘pack of, ah, you know whats’. This DVD release includes the full race, including all vision from the ad breaks as the cameras kept on filming.

The first V8-era Bathurst 1000 won by our V8 Sleuth Podcast guest Larry Perkins and the late Gregg Hansford in the Castrol Commodore VP. This DVD release includes the full race day telecast, including all vision from the ad breaks as the cameras kept on filming.

A compilation of the Australian Touring Car Championship rounds held at the Victorian circuit in 1986, 1988 and 1994.

A look back at three great ATCC rounds from the V8 era that led to what we now know as Supercars. This great title includes the 1993 Lakeside, 1994 Phillip Island and 1995 Eastern Creek rounds.

We’ve released a range of other 1995 ATCC rounds on other titles, so we thought we would release a pile of the ones we haven’t on the one title! This DVD will include the opening round from a soggy Sandown, the Mallala round (featuring a ripping Peter Brock comeback drive after a lap one spin) and Barbagallo.

As an addition to the six ‘SSMMOM’ titles in 2020, we’re released another Classic Australian Motorsport DVD covering the 2002 and 2003 Bathurst 24 Hour races featuring victories by the might seven-litre V8 Monaros.

Instead of re-releasing the highlights DVDs of these races we’ve delved into the Channel 7 tape files and cut together a pile of the action ourselves.

We’ve got early race highlights of 2002 and the last 90 minutes of the telecast, while for 2003 we pick up the start section of the race and the final two hours in full as it aired on the day.