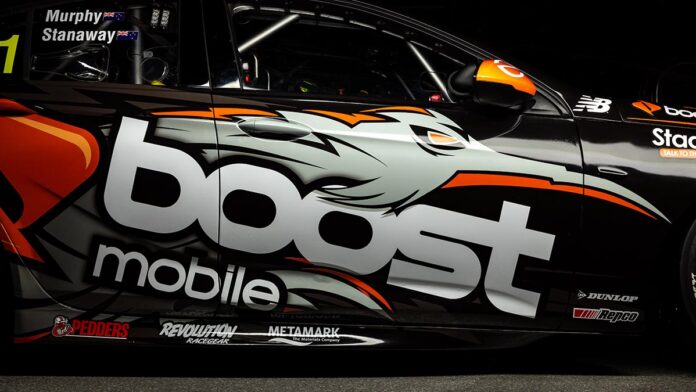 THE colours that Greg Murphy and Richie Stanaway will carry in their returns to Supercars racing at the Repco Bathurst 1000 have been revealed.

Erebus Motorsport unveiled the colours on the Holden Commodore ZB that the New Zealand duo will race at Mount Panorama in a deal brokered and backed by Boost Mobile chief Peter Adderton.

A bold, silver Kiwi on the doors of the #51 entry ensures it will stand out among the three cars set to carry primary sponsorship from Boost Mobile in the race.

EXPLAINED: How Greg Murphy came to use the number 51

For Murphy, it marks a return to the Repco Supercars Championship for the first time since his retirement from co-driving at the end of 2014, while Stanaway walked away from motorsport at the end of the 2019 season after two difficult full-time seasons in the championship.

“The livery looks amazing! The kiwi combined with the Boost branding is awesome, it’s a car you really want to race,” Murphy said.

“I know the fans are going to love it, especially the New Zealand fans. Anything that pays tribute to the Kiwi’s is going to be very well received.

“The reaction to this whole wildcard thing and the excitement around it has been incredible so I think the fans will really appreciate the livery and want to see it on track.

The #51 has been synonymous with Murphy’s most successful period in the championship.

All up, 138 of Murphy’s 200 championship race starts to date have come with a car numbered 51, dating back to his maiden race with the Kmart Racing Team at Phillip Island in 2001.

His immortal ‘Lap of the Gods’ was set in a car carrying those digits, which he and Rick Kelly drove to victory the following day in the 2003 Bathurst 1000.

FROM LAPPED TO LEGEND: How the ‘Lap of the Gods’ Holden found its speed

It will mark the first time the #51 has been used in a Supercars Championship race since the final race of Murphy’s full-time career at Sydney Olympic Park in 2012.

“It’s pretty special to be driving in the #51 with Greg,” Stanaway said.

“It’s an iconic number so I’m going to have to bring my A-game and make sure I can represent the number well.

“For me, the most exciting part is to be back racing with a great team. I’ve put in a lot of preparation to make sure I am ready for the opportunity and can make the most of it.”

The Commodore will be on track at Winton on Tuesday as Erebus conducts a driver evaluation day as Murphy and Stanaway’s wait to steer the car continues.

Both had been scheduled to conduct test days aboard the car, but those plans have been delayed by the re-enforcement of travel restrictions between New Zealand and Australia prompted by the second wave of the COVID-19 pandemic.

Murphy and Stanaway are expected to have their first test day in the car in mid-November.