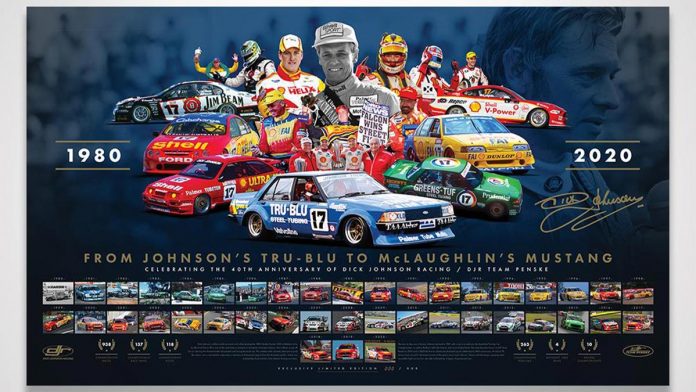 Johnson founded the DJR name in 1980 in the wake of the mountain of public donations – matched dollar for dollar by Ford Australia – pledged to the Queenslander after his heartbreaking exit from the lead of the 1980 Bathurst 1000.

In honour of the milestone, a limited edition collector’s print celebrating the team’s rich history is being released by Authentic Collectables and is available to pre-order now via the V8 Sleuth Bookshop.

Signed by Dick Johnson himself, this print is a must-have piece of memorabilia.

This mammoth print – measuring 1 metre wide – is officially endorsed by Dick Johnson and DJR Team Penske and features imagery from each year of the team’s existence, from the ‘Tru-Blu’ XD-model Ford Falcons that Johnson steered to his first championship and Bathurst triumphs, through to the Ford Mustangs that Scott McLaughlin piloted to glory in both the Supercars Championship and at Mount Panorama in recent years.

Only a limited edition run of these prints will be produced (the final number will be determined by pre-orders) with each to be hand-signed by Johnson himself.

This is an amazing collector’s print for fans of DJR/DJR Team Penske, celebrating an incredible milestone in the decorated squad’s history.

Order here now to make sure you don’t miss out.

Note – delivery date to be confirmed. Artwork above is not final, subject to subtle changes before printing with final statistics and minor updates to be completed following the 2020 Bathurst 1000.