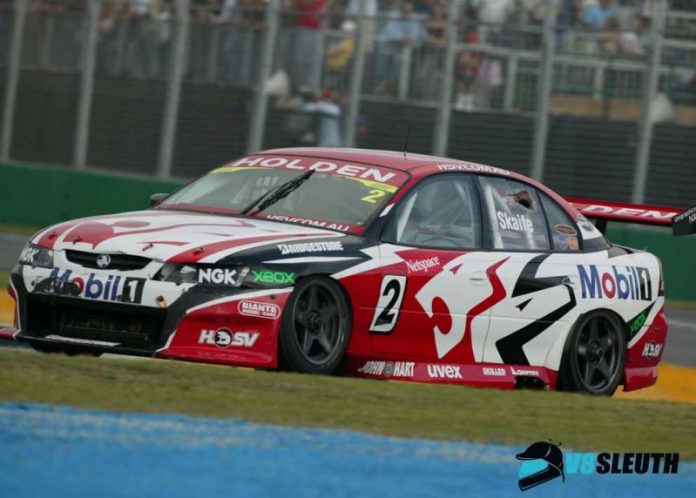 PLENTY of Holden Racing Team fans will remember the polarizing part of the team’s 2004 livery – the addition of black racing wheels.

As part of writing his soon-to-be-released book covering the histories of all 47 cars to carry the Holden Racing Team, author Aaron Noonan from V8 Sleuth has compiled a wide range material and information that simply can’t fit within the books pages in full format.

To make sure you don’t miss out on your copy of the collector’s edition limited to just 1000 copies, pre-order here now.

One of these topics researched has been the striking liveries of the cars raced by the famous factory team over the years, prompting us to publish some of these stories in a more fuller format here in the V8 Sleuth website than can’t quite be squeezed into the book.

Many race fans will remember the 2004 HRT Commodores of Mark Skaife and Todd Kelly and, in particular the black wheels it featured in what was a miserable season for the team as its new Holden Motorsport package wasn’t competitive compared to the Stone Brothers Fords and 18 degree Chev-mounted Kmart and PWR sister teams.

The 2004 livery was the first by young GM Holden designer Justin Thompson and also the first using Alias Studio to generate accurate math renders of the liveries, thus projecting the livery designs to generate realistic images of the designs – rather than hand-drawn sketches.

And the young designer was able to bring a ‘black’ plan to fruition that 2003 livery designer Max Wolff hadn’t been able to.

“I wanted to create a distinctive livery that stood out from previous red and white designs and I thought the best way to do this was to introduce black into the scheme,” says Thompson.

“I think the black wheels suit this particular livery. I wanted to change the persona of the car to have more of a US-style stock car look to it – hence the idea to use the darker wheels.

“I wanted to give the front end an extremely aggressive and unique graphic that worked with the features of the VY body. I think previous designs were less sensitive to the forms of the body, whereas I wanted to use the sharper angular appearance of the VY to enhance the livery.

“The front fascia was complex for 2004. With three colours requiring paint, it also made for an expensive repair when the fascia was wrecked!

“The black and white flanked the forms of the front fender giving the design a ‘lightning bolt’ effect down the front of the body side. Since Max Wolff simplified the HRT logo (in 2003), we changed the stylized helmet to have black in an attempt to make it more recognisable as a helmet. I’m not too sure it was successful though.

“Although we were the ‘red’ team I wanted to create an angry, aggressive look to the car. I felt the red and white were just too nice and not aggressive enough. Mark Skaife and HRT were onboard as soon as they saw the concept sketches for the design.

“The 2004 car was not as successful on the track as previous cars. I think race car drivers are somewhat superstitious and, as such, Mark (Skaife) was pretty keen to drop the black!

“I’m not too sure if public opinions helped either. Had the 2004 car won the V8 Supercar championship then it probably would have been on the 2005 car!”