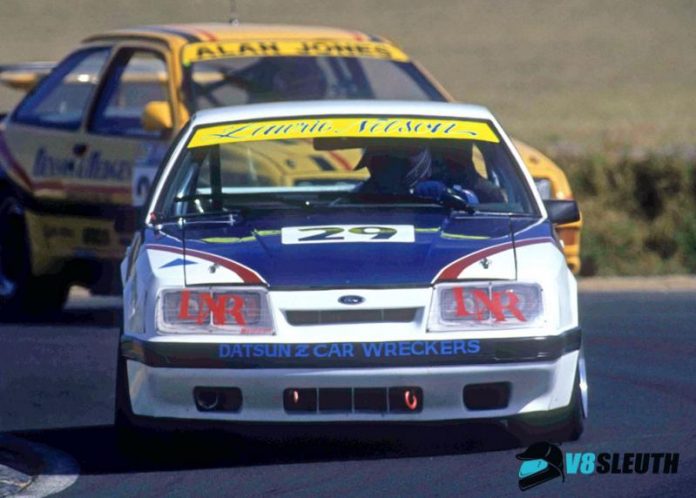 TALK of a Ford Mustang racing in the Virgin Australia Supercars Championship has been bubbling away for quite some time and is not a new thing.

A story in News Limited media outlets this week focusing on Prodrive Racing Australia pushing ahead with plans to design a Mustang around the Car of the Future chassis with plans to race it next year has got plenty of fans excited.

Whether it does or doesn’t happen, time will tell.

But it made the V8 Sleuth team ponder a question posed by one of our followers on Twitter.

When was the last time a Mustang competed in the Australian Touring Car Championship?

The answer is March 25, 1990 at the third round of that year’s championship at Phillip Island.

Veteran Lawrie Nelson had been running his Mustang since Group A had arrived in 1985 and was still wheeling it out on occasion, though the turbo Sierras and Skylines and V8 Commodores really had left the old Ford in their wake.

Nelson qualified 29th at Phillip Island, matching the #29 he carried on the ‘Stang.

Reports from the period are varied as to why he didn’t compete a racing lap in that day’s 50-minute timed race.

The Australian Motor Racing Yearbook says he wasn’t on the grid by the start of the race, Auto Action says he was pushed off the grid (whether this was on the warm up lap or not is unclear!) and the CAMS Dispatch of the event listed him as a ‘DNF’ with 0 laps completed.

Whatever was the story (perhaps a reader who was there or worked on Lawrie’s team can shed some light?!), it wasn’t a fitting way for Mustang to sign off from the championship given its great history with the likes of Ian Geoghegan, Allan Moffat, Norm Beechey, Bob Jane and Dick Johnson.