Home News THE CAR THAT COULD HAVE SUCKED IN THE CLOUDS! 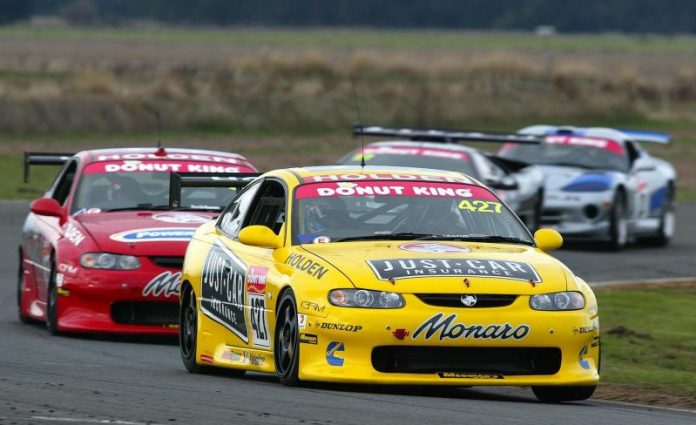 THE Nations Cup-spec Holden Monaro that claimed victory in the inaugural Bathurst 24 Hour in 2002 still has a special place in Nathan Pretty’s heart.

One quarter of the race-winning driver line-up alongside Garth Tander, Steve Richards and Cameron McConville, Pretty actually did the most racing in the yellow Monaro built and run by Garry Rogers Motorsport.

The former AUSCAR star drove the car in both of its 24 Hour outings at Mount Panorama in addition to full-time Nations Cup series assaults in 2003 and 2004.

But it was his win in the 2002 Bathurst 24 Hour that the former Supercars endurance regular says is the crowning achievement of his racing career.

“I think it’s my bannerhead achievement,” he tells V8 Sleuth.

“That win nearly didn’t happen. I got hit and turned around by a BMW in the Chase at 3am. It came back to the mentally I would find a way to drag it back to the pits. I had to get out of the car because it wouldn’t re-fire because was stuck in gear and I couldn’t put the clutch it.

“I was in a divot and had to rock the car to get it rocking to jump in and get neutral and get it started to get back to the pits. Rather than just unplugging and walking away, it was a mentality of always trying to get it back out there for the sponsors and get running again for some air time at the very least.

“That Monaro we had to drive it to a number. We had chosen a lap time that we felt would best look after the car mechanically and we had to stick to it. It could have done some very fast lap times – it doesn’t matter if it was cloudy or not, in that first year if it was unrestricted we would have sucked the clouds in!

“That throaty noise of that car stands out, it was a lot of fun. The hardest thing about that race was sticking to the number.

“All the boys will say that the car could have gone a lot faster, but it’s a lot easier to drive at nine or 10 tenths than six or seven because that’s when you lapse concentration and you make mistakes.”

Pretty looks back on the seven-litre beast as an impressive piece of kit.

“It was a fun car. Apart from driving a GT car, it’s probably the best car I’ve ever driven. It has a special place in my heart.

“Doing the Nations Cup wasn’t part of the original deal when I first signed on to do the 24 Hour. Garry (Rogers) knew the other blokes were all busy with Supercars and he said I was the go to do it.

“I was in Wodonga and travelling down, on a wage with GRM, Garry was very good to me and it also gave me an enduro drive with them as part of that deal.

“I had a lot of wins in that car in the Nations Cup; I never got beaten at Winton. I had some ripper battles with Paul Stokell in the Lamborghini and (John) Bowe in the Ferrari, and some strong tiffs both in and out of the car as well!”

Pretty raced full-time in 2003 with Peter Brock as teammate after GRM built a second Nations Cup-spec Monaro. He still has happy memories of his season sharing a garage with ‘The King’.

“With PB, he taught me a lot as well and you can see how it brushed off onto guys like Lowndes,” says Pretty.

“He was so good with people. The guy was a master of looking after the fans. To be his teammate … I grew up idolising the guy, to meet him was cool enough doing some Holden drive days as one of the boys – even though he drank tea – he had some cool stories.

“There were some really cool times with him, stuff I will remember forever. A lot of the newer generation now know of him but don’t quite know what he really means to Australian motorsport.”