Home News WHAT’S IN A NUMBER FOR SIMONA? 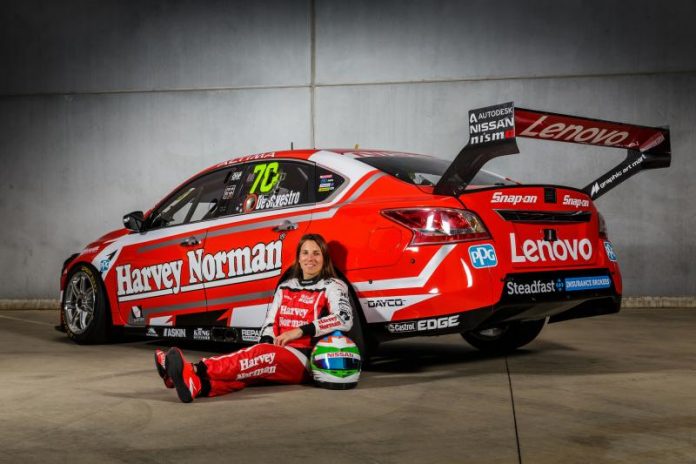 SIMONA de Silvestro is getting ready for the Clipsal 500 and the start of her full-time career in the Virgin Australia Supercars Championship.

And we’re getting ready too for the number of ill-informed reports over the upcoming weeks that will state she’s the first female driver in the history of the Clipsal 500 in Adelaide!

Actually, the former IndyCar ace is most certainly not!

South Aussie Kerryn Brewer, originally part of the Castrol Cougars Supercars squad in 1997, competed in the inaugural Adelaide Supercars 500 – when it was known as the Sensational Adelaide 500 – in a Perkins-built privateer Commodore owned by Owen Parkinson back in 1999, pictured above.

However one thing de Silvestro will be doing in Adelaide is racing under a number that hasn’t appeared in the sport for a very, very long time.

Her familiar #78 – which she used during her time racing IndyCars in the United States – will be on the side of the Team Harvey Norman Nissan in Adelaide, marking the first time in 27 years the number has been used in the championship.

You have to rewind back to Oran Park 1990, when Geoff Full ran it on his small class Toyota Corolla, to find a driver using #78 last – as seen in thegreat shot from the AN1 Images archives shown above.

Actually, de Silvestro is in very good company by running #78 – none other than the late Sir Jack Brabham ran #78 on his four-door Torana A9X in the 1978 ATCC round at Sandown!

We look forward to seeing how Simona goes next weekend in Adelaide.