Home News WHO HAS THE MOST BATHURST PODIUMS WITHOUT A WIN? 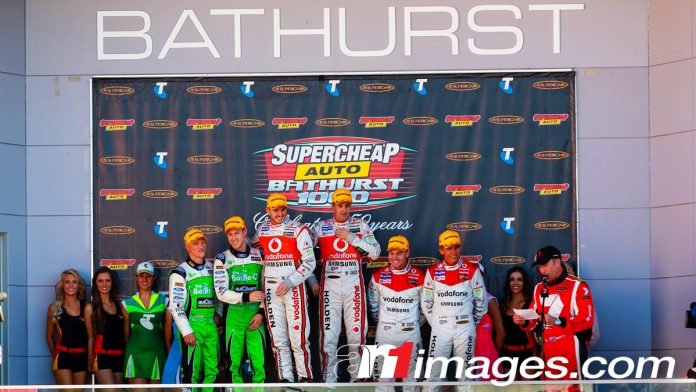 CRAIG Lowndes has a Bathurst 1000 record that is the envy of many with more podium finishes in ‘The Great Race’ – 14 – than any other driver in the history of the famous event.

Exactly half of his podium visits – seven – have come as winner of the famous 1000-kilometre race.

But spare a thought for the drivers who have visited the Bathurst podium on many occasions, only to never quite get onto the top step of the podium and spray the champagne as victor.

Former Audi teammates Brad Jones and Cameron McConville jointly hold the record for most podiums without a Bathurst 1000 win – six in total.

They shared one of them in 1998 when they finished third in the AMP Bathurst 1000 Super Touring race in one of BJR’s Audi Quattro A4s.

Warren Luff is catching them rapidly, his five Bathurst 1000 podium finishes coming from the last eight years – all the more impressive given he missed the 2014 race due to damage sustained to the HRT Commodore he was sharing with Garth Tander.

Luff will join Chaz Mostert in the #25 Mobil 1 Appliances Online WAU Commodore for this year’s race, a car that will be auctioned off before the commencement of on track activity at Mount Panorama.

Two drivers sit on four Bathurst podiums – Glenn Seton and James Courtney – and this pair actually teamed up to finish third in 2006.

Seton – whose autobiography is being published by V8 Sleuth and will be available in November, order here now – didn’t even get to stand on the podium for what counts for his first Bathurst 1000 podium from 1987.

He and Nissan partner John Bowe finished fourth on the road and were elevated weeks later to second place in the wake of the Texaco Sierras being excluded from the race.

Courtney finished third again last year with Jack Perkins and this year will make his first Bathurst start in a Ford since his 2010 championship-winning season with Dick Johnson Racing.

THE MOST PODIUMS WITHOUT A WIN IN BATHURST 1000 HISTORY: