Home News WHY LOWNDES IS THE IRONMAN OF V8 SUPERCARS 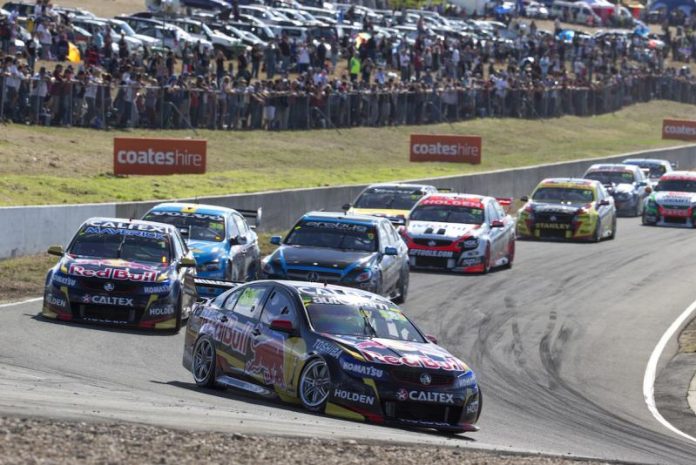 But who does he have to beat though to claim an important V8 Supercar milestone?

RED Bull Racing Australia’s Craig Lowndes is very much the current ‘Ironman’ of the V8 Supercars Championship due simply to the fact he’s gone two straight calendar years without failing to finish a race.

It’s a fact that could play a massive part in winning him his fourth V8 Supercar crown and first in 15 years.

Since clashing with Will Davison in the Sunday race at Symmons Plains in 2012 and retiring with a wheel hanging off his TeamVodafone Commodore, Lowndes has gone on an amazing run of 75 straight race finishes ever since.

Sure, some of them haven’t been epic results – take the last two rounds at Winton and Pukekohe for example – but a finish is a finish.

To put it into perspective, his previous best finishing streak in the ATCC/V8SC was 60 races from 2006 Pukekohe to 2007 Gold Coast.

So who holds the record?

Well, it’s the same man who holds the record of most round starts – Russell Ingall.

‘The Enforcer’ finished an incredible 95 straight championship races during his championship-winning era (he won the crown in 2005) with Stone Brothers Racing from 2004 Eastern Creek to 2007 Pukekohe.

Within that period – at Darwin in 2005 – Ingall failed to start a race (when his Caltex Ford wouldn’t crank into life for Race 3), though this does not affect the finishing streak. After all, you have to start a race to actually be able to finish it!

He will need to finish every race from here until the end of Race 1 at Phillip Island in November to match Ingall’s mark and could beat it if he then can finish the second race at the ‘Island.

It will make an interesting sub-plot to the already-great storyline of the 2014 V8 Supercars Championship over the upcoming events.