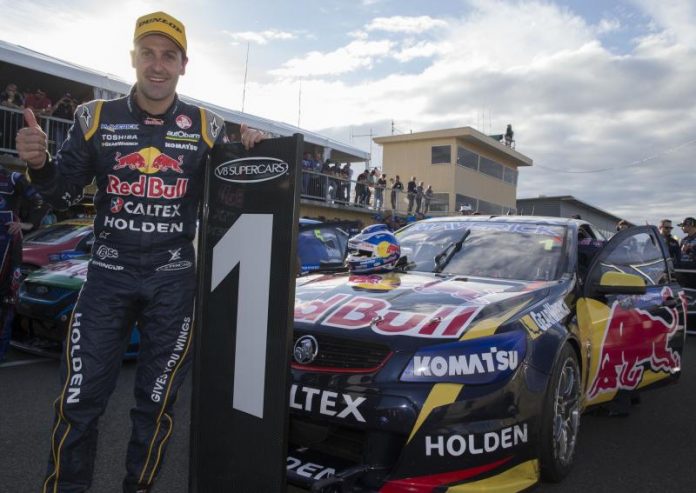 IT’S only a matter of time before Jamie Whincup claims Peter Brock’s record for most pole positions in the history of the Australian Touring Car Championship/V8 Supercars Championship.

After clean-sweeping all three at Symmons Plains last weekend, Whincup has moved to a tally of 55, just two short of Brock’s record of 57.

Some would say that Whincup’s achievement is not as special as it may seem considering each and every race these days in the championship has its own qualifying session and, thus, he has many more opportunities than Brock did to score pole positions.

That is certainly the case in terms of sections in the championship’s record book dealing with ‘most poles in a season’ and the like, however for the number of poles itself on the whole, it actually doesn’t make any difference.

When you analyse the numbers closely it shows that Whincup’s achievement is certainly on a par with Brock’s when their actual opportunities to collect pole positions is closely investigated.

Whincup’s 55 poles have come from 211 qualifying attempts over 13 seasons (this does not include when his co-driver has qualified their car at endurance events or the grid for the next race was determined by the finishing results of the previous race etc).

Brock’s 57 poles came from 210 attempts, albeit spanning a much longer period of time from 1972 to 2004, though in many years the championship was very weak with minimal teams and drivers competing in all of the rounds in the 1970s and 1980s (Brock himself missed some rounds for various reasons in those years).

So, when you compare how many times they have bolted themselves into a car at a championship event and gone hell-for-leather to try and beat their rivals for pole position, they have done it on a virtually identical number of occasions for a near-identical number of ideal outcomes.

To say Whincup’s achievement won’t be as special or mean as much as Brock’s is actually a furphy – you cannot get any closer to comparing apples to apples and oranges to oranges when comparing two drivers of very different eras in the same stats column.

The numbers clearly show that Whincup has (nearly!) achieved the number with a completely comparable number of opportunities to Brock.

The numbers don’t lie – Whincup will be a deserved holder of the record should he take three more pole positions in his ATCC/V8SC caree r.

Remember where you read it first!