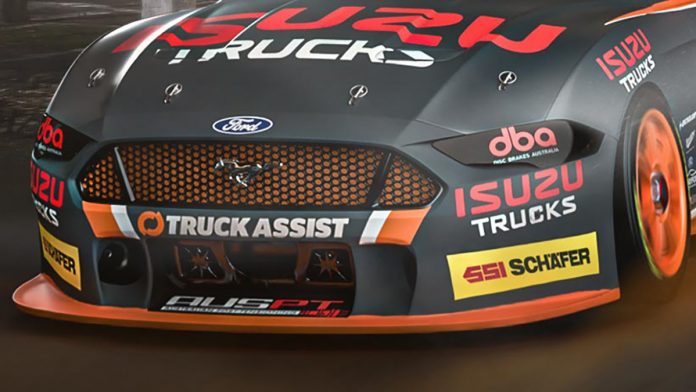 Le Brocq moves into the #5 Truck Assist-backed entry for his second ‘main game’ season with the team as the Ford squad slims down to a three-car operation.

The 28-year-old enjoyed a breakthrough year in 2020; he claimed his first Supercars Championship race win at the second Sydney Motorsport Park round and challenged for another in a stirring late-race battle at The Bend.

“I’m pumped for the new season,” Le Brocq said. “Last year was obviously pretty crazy for everyone, but we took a lot of positive steps during the year and picking up the win in Sydney was unreal.

“I feel like I improved as a driver and got more comfortable as the year progressed, obviously I want to continue that this year and take that next step forward.

“I’ve been working hard and I know the boys have been working hard getting the car together, so we’re looking forward to the challenge and hopefully you’ll see those bright orange wheels on the Truck Assist Mustang at the front of the field in 2021.”

Le Brocq’s move to the #5 car amid the squad’s reduction to three entries means the #55 of Tickford Racing co-owner Rod Nash will not be on the grid for the first time in 15 years.

Nash’s history with the number dates back to his own driving career in the Supercars Championship.

He campaigned the #55 from 1998 to 2000, the latter year with Nash as a part-time entry while Cameron McConville raced full-time in the team’s #54 car.

The number disappeared from the grid in 2001 when RNR fielded Tony Longhurst as a solo entry and didn’t reappear until 2006, when Nash began fielding his own team after several years where his entry was run by Ford Performance Racing and Perkins Engineering.

Paul Dumbrell gave the number its first Supercars Championship race win in 2010, a year where Nash’s outfit returned to the FPR operation as its third car.

All up, the #55 has taken a total of 10 championship race wins, with Dumbrell, Le Brocq, David Reynolds, Chaz Mostert and co-drivers Dean Canto and James Moffat all contributing.

The new colours will hit the track at the Victorian teams’ pre-season test day at Winton Motor Raceway on February 16, less than a fortnight before the opening round of the 2021 Repco Supercars Championship, the Repco Mount Panorama 500.