Home News GALLERY: YOUR GUIDE TO ALL THE 2021 SUPERCARS LIVERIES 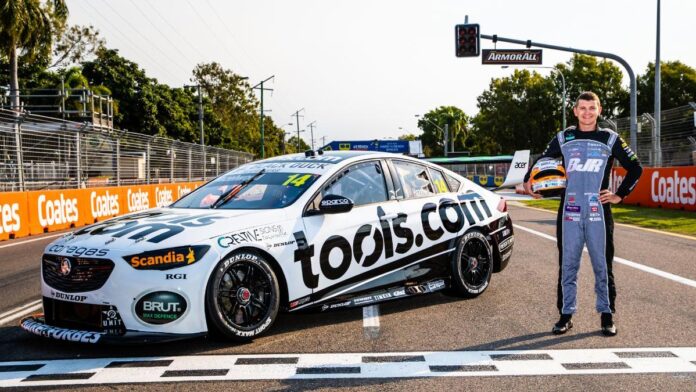 THE Repco Supercars Championship may be underway but there are still plenty of new liveries to be revealed throughout the 2021 season.

Here’s a full rundown on every livery revealed by Supercars teams so far.

The team is once again known as Dick Johnson Racing after the exit of Team Penske but retains a familiar livery on its two brand-new Shell V-Power Racing Team Ford Mustangs.

The covers came off live on Channel Seven’s Sunrise program on February 9 ahead of a media launch later that same day, where it was announced that Shell had extended its title sponsorship of the squad with a new multi-year deal.

De Pasquale will run the #100 at the season-opening Repco Mt Panorama 500 in honour of a milestone for sponsor Pirtek, whose new store in Albany, WA is the 100th they’ve opened in Australia.

De Pasquale will run the #11 as his primary number for the balance of the 2021 Repco Supercars Championship, citing his use of the number in a key junior category title win in Europe. Long-time #11 user Larry Perkins ceremonially handed the number over to the Dick Johnson Racing pilot ahead of Round 2 at Sandown.

EXPLAINED: The practical logic behind Perkins’ use of #11

Dick Johnson Racing’s Mustangs will run with a special indigenous livery at Hidden Valley to celebrate the ‘Racing Together’ program giving 12-to-18-year-old Aboriginal and Torres Strait Islanders an opportunity to pursue a career in motorsport.

Inspired by artist Allison Millcock’s ‘Turtles Crossing Cultures’, the livery has been designed by 17-year-old Braedyn Cidoni, who is also a driver for the Racing Together team.

Now racing under the banner of Red Bull Ampol Racing, Triple Eight revealed a new camouflage blue and white livery live on Sunrise program on January 29 – the second livery launch to occur on Channel Seven’s high-rating morning show since the start of Supercars’ new broadcast rights deal. Click the link below for the full gallery of images.

Both Triple Eight cars will run a special indigenous livery at Hidden Valley designed by students of the Clontarf Foundation’s Nightcliff Academy in Darwin.

The artwork, which covers the roof and rear wing, features colour circles of the Aboriginal flag, and is anchored by a blue and white path through the middle of the design, which symbolised a connection to the theme of NAIDOC and new beginnings.

Footprints and fingerprints of all Nightcliff Academy students also feature in the livery design to represent knowledge, understanding, change and power

‘JLB’ moves across from the team’s #55 entry to its #5 Ford Mustang, which reunites him with primary sponsorship from Truck Assist. The livery was revealed on February 1, one of three unveiled on that day. Click the link below for the full gallery of images.

Waters will carry the signature colours of Monster Energy on his #6 Ford Mustang for the sixth year in a row, the revised livery 2021 revealed on February 3 ahead of a sponsor ride day at Phillip Island. Click the link below for the full gallery of images.

Courtney embarks on his first full season with Tickford Racing with a revised livery on the #44 Boost Mobile Ford Mustang, the colours revealed on February 3 ahead of a sponsor ride day at Phillip Island. Click the link below for the full gallery of images.

In addition to being signed as one of Tickford’s co-drivers for the Repco Bathurst 1000, Randle will also take part in three single-driver events as a wildcard entry. The car will carry primary sponsorship from Castrol, with additional support from ACT Fence Hire and Herzog Steel.

The new Blanchard Racing Team was actually the first team to reveal its 2021 livery back on December 14, 2020, with Tim Slade’s Mustang set to run in bold blue and white colours. Click the link below for the full gallery of images.

The rechristened Erebus Motorsport squad adopted this stunning matte monochrome livery for its first test day of the 2021 season – note the return of the ‘Erebus’ badge on the grille in place of the Holden lion.

Both the #9 of Will Brown and #99 of Brodie Kostecki ran in these colours at Winton on January 27.

Erebus Motorsport will run a rolling sponsorship model on Brown’s #9 entry this year, following the loss of previous backer Penrite. This WD-40 livery has been revealed ahead of the Repco Mount Panorama 500, with further primary sponsors to be introduced across the season.

Revealed on the Friday of the Sandown SuperSprint, Brown’s #9 Holden will carry the company’s colours at Sandown, Symmons Plains and The Bend.

Car #9’s third livery for 2021 is a familiar one for anyone who watched Supercars’ Eseries in 2020 – it’s the Pedders livery that company managing director Scott Pedder drove to victory in the series’ celebrity event, as well as to the 2014 Australian Rally Championship title.

Pedders joined Erebus as a sponsor at the start of the 2020 season and this marks the first time the long-time motorsport supporter has taken the primary backing of a car in the Repco Supercars Championship.

Following pre-season testing Erebus revealed a new partnership with Boost Mobile, which has taken naming rights to Kostecki’s #99 Commodore. The deal gives Boost two cars on the grid given it continues to back James Courtney at Tickford. The Erebus Holden and Tickford Ford are presented in two distinctly different liveries.

Mark Winterbottom continues in the colours of IRWIN Tools for a third season at Team 18. In addition to the traditional blue and yellow, the car takes on a splash of Bunnings’ iconic green on its rear quarter panels this year. Bunnings is the exclusive retailer of IRWIN Tools in Australia.

Scott Pye will once again sport backing from power tool brand Dewalt for his second season with Team 18. The company’s trademark yellow and black colours underpin the livery, which was revealed on February 15; a day after teammate Winterbottom’s IRWIN car.

The #2 Holden was the first livery revealed by Walkinshaw Andretti United for the 2021 season on January 27 ahead of Fullwood’s first rookie test day of the year. Click the link below for the full gallery of images.

The covers came off this stunning teal and black, Peter Hughes-designed livery on February 1 prior to the shakedown of Mostert’s new chassis at Phillip Island a couple of days later. Click the link below for the full gallery of images.

Walkinshaw Andretti United will run a three-race wildcard program for Kurt Kostecki, taking in The Bend, Hidden Valley and Wanneroo. The Western Australia’s Holden will race with primary backing from long-time WAU partner Mobil 1, with branding that highlights its distribution by Ampol at its petrol stations throughout Australia.

Jack Smith’s SCT Logistics Holden was the first to have its livery revealed by Brad Jones Racing for the 2021 season ahead of a rookie test day at Winton on February 9.

After four seasons of rotating primary sponsorships, Nick Percat will carry the colours of R&J Batteries as the #8 Holden’s major sponsor for the full 2021 season. Click the link below for a gallery of images.

Todd Hazelwood will start the 2021 season in the colours of Dunlop Super Dealer at the Repco Mount Panorama 500. Click the link below for a gallery of images of the new-look car.

GALLERY: Fresh look for Hazelwood to start the 2021 season

Cub Cadet Mowers returns to the flanks of Hazelwood’s Holden for 2021, taking primary sponsorship at Sandown. The company previously backed BJR’s #14 entry at the 2020 Bathurst 1000.

South Australian company TRG Transport Solutions returns to the flanks of the #14 Commodore for Hazelwood’s home event. The company took on primary sponsorship on Hazelwood’s car for both events at The Bend last year, but has adopted a revised livery for 2021.

BJR has landed Pizza Hut for the #14 Holden’s primary sponsor for the Hidden Valley and Townsville rounds. Fans are a big winner from an activation across both events: if they post a picture of themselves with the #14 Pizza Hut Supercar and use the hashtag #PizzaHutSupercars, they will score a free large pizza!

Hazelwood’s race suit is also up for grabs through a competition, where ordering one of Pizza Hut’s Supercars Super Deals (available from June 14 to July 11) puts you in the running – check out Pizza Hut’s website for details.

Hazelwood’s Commodore underwent a transformation in the week between Townsville events; pizza out, tools in!

Brad Jones Racing unveiled this tools.com scheme on the eve of the SuperSprint, in a continuation of the #14 Commodore’s rolling sponsorship model.

Macauley Jones’ third season racing full-time in the ‘main game’ will be under the BJR banner following Tim Blanchard’s move to set up his own squad for 2021, with a new number – #96 – and primary sponsorship from Coca-Cola Amatil. Click the link below for a gallery of images of the new-look car.

NED Whisky returns to back Heimgartner’s #7 Ford Mustang for a second season, this time joined by new Kelly Grove Racing sponsor Penrite Oils. Click the link below for a gallery of images from the car’s photoshoot at NED’s headquarters in Campbellfield, Victoria.

NED Whisky is highlighting its new Whisky & Cola 8% product with a stunning new look for Heimgartner’s #7 Ford Mustang. The black and blue colours make their debut at the Townsville 500 and will remain on the car for the following three rounds, which at this point are scheduled to be the Townsville SuperSprint, Sydney SuperNight and Perth SuperNight.

Penrite joins the renamed Kelly Grove Racing in a major sponsorship role on new recruit Reynolds’ #26 Mustang, the two moves confirmed on January 16 on Channel Seven’s Weekend Sunrise show. Click the link below for the full gallery of images.

Although Sandown is not officially a retro round in 2021, Penrite has continued its tradition of running throwback liveries at the Melbourne venue.

Reynolds will run a stunning, one-off black and gold look that harks back to an iconic 1960’s Ford Mustang colour combination.

Coulthard carries major support from Tony Quinn’s Local Legends Meat Snacks company in 2021, having taken over the drive filled by Alex Davison for the bulk of last season.

Jacobson’s car features the same eye-catching yellow and black hues as Coulthard’s, albeit with different branding. His car sports primary backing from PremiAir Hire and has been revealed with the Tour De Cure cancer charity logo adorning its bonnet.

Clothing brand UNIT continues to back Matt Stone Racing’s #34 entry this season, having sponsored the ‘SuperLite’ program last year that featured Kostecki and Zane Goddard with a very similar livery. Kostecki is driving the car full-time in 2021.

YellowCover returns to MSR’s #35 Commodore as Goddard takes over driving duties from Garry Jacobson. This livery has also received only minor tweaks from its 2020 guise. Both MSR cars were revealed ahead of a rookie test day on February 10.

The #35 Holden will roll out with a NASCAR-themed livery for the Townsville 500; although there’s no number on the door, the Yellow Cover logo now moves rearward on the doors and rear quarter panels, while a slew of sponsors take pride of place behind the front wheel arch in the same style as NASCAR’s traditional contingency sponsor placements.

PODCAST: FROM THE ARCHIVES – BOB JANE