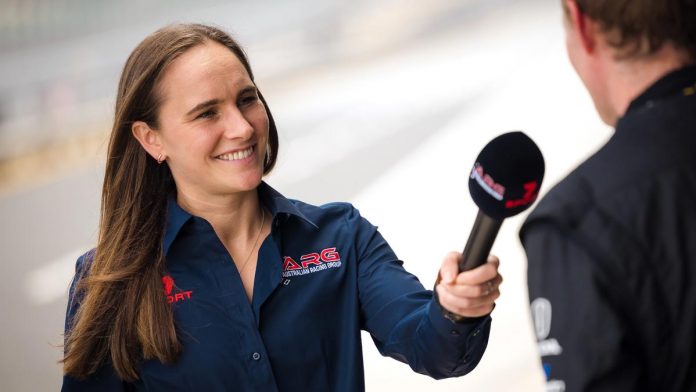 Rally star Molly Taylor made her Supercars debut as part of the television line-up at last weekend’s Repco Mount Panorama 500.

But if things had panned out a little differently, she may well have appeared in the 2021 Repco Supercars Championship as a driver.

V8 Sleuth can reveal Taylor tested a Brad Jones Racing Super2 Series Commodore in December 2017, amid a push by Holden to lure the ’16 Australian rally champ into circuit racing.

Holden’s plan to place Taylor in the then-new SuperUtes Series in 2018 and progress her towards Supercars’ top tier was spruiked by the car brand at the time, but her Super2 test took place in secret.

Taylor drove Macauley Jones’ Holden Commodore VF at a BJR driver evaluation day at Winton, before a variety of factors including changes within Holden meant the plan ultimately went nowhere.

“I went along to just to try it out and see what it was all about,” Taylor told V8 Sleuth of her Supercars test.

“It was awesome, I absolutely loved it, there was the potential of something happening, but we couldn’t put it together in the end.

“Not that long afterwards the window closed [with Holden], but at the same time I was still with Subaru and still doing the rally stuff, which was always the priority.

“It wasn’t to be, but I’ll always remember that day and having the chance to drive that car and getting a glimpse of what it’s like from the driver’s side.”

Taylor had no circuit racing experience to speak of prior to the test but was encouraged by her performance.

“There was lot to learn but I was really encouraged by the test. It was better than I expected, and I was really happy with how it all went,” she said.

“You’re always trying to learn everything and string a lap together; it was a lot to take in during a couple of sessions, but I got a good amount of running to get a feel for it.

“Obviously having someone like Macauley doing laps in the car and seeing where you’re at was a really good baseline.

“It was a good first step [towards racing Supercars], but it was only the first step. You’ve got to keep progressing to make anything of it.”

Taylor eventually made her circuit racing debut via a short-lived Subaru TCR program in 2019.

Asked whether there will be more circuit racing in her future, Taylor said: “I never say never to anything, but not for the immediate future.

“This Extreme E opportunity has come up… two years ago I would have never envisaged being in this position now and that’s just an awesome opportunity, I can’t wait to get involved in that series.”

As for her television duties, Taylor admits she’s got much to learn. She’s appeared on Seven’s recent ARG and Supercars broadcasts and is expected to return to the latter for October’s Bathurst 1000.

“I obviously have a lot of work to do, it’s completely new from my end doing this sort of stuff, just how much harder it is asking the questions than answering the questions,” she said.

“Everything seems a lot easier when you’re watching someone else do it. It’s a jump into the frying pan for sure, especially at this level.

“I’m acutely aware that I’m a novice and I have a lot to work on and improve but you’ve got to start somewhere and there’s no better people to mentor you than the whole crew in this field.”

Taylor remains an ambassador for Subaru Australia and gained nationwide fame in 2020 by appearing on Seven’s reality program SAS Australia.