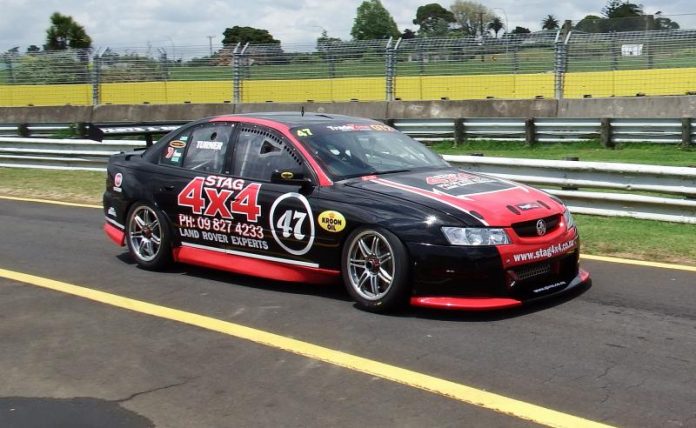 LARRY Perkins is a legend of Australian motorsport and the cars his team built during its time in operation from 1986 to 2008 have ended up in all corners of the country.

But some of them have also ended up overseas and that is the case with chassis PE 042, a VY Commodore the team built 15 years ago in 2004.

The car has been in action this weekend in the hands of owner Morris Turner competing in the GT2 group of the GTRNZ (GT Racing New Zealand) category at Pukekohe in New Zealand.

As its own website says, ‘TradeZone GTRNZ is the home to some of New Zealand’s fastest race cars, with almost no rules and anything goes, no power limits, v8s, 6s, 4s, turbos, rotarys, spaceframe transams, ex Australian Supercars and the best of New Zealand’s homebuilt racecars.’

So basically, it's a category where just about anything goes!

Turner’s Commodore started its life in 2004 as Anthony Tratt’s Toll Racing car, built and run by Perkins Engineering after the Toll team closed down operating its own outfit that it had done in previous seasons with Falcons.

Tratt drove this chassis throughout 2004, above, (including having Tomas Mezera as co-driver for that year’s endurance races, including his last Bathurst 1000 start) and again in 2005, below, with Tony Evangelou as co-driver in the enduros.

However Tratt and Toll finished up with Perkins on a sour note in the last round at Phillip Island in qualifying when the former Porsche Cup racer lost control at approximately 220km/h.

“It’s lucky for his own wellbeing that we build strong cars – the windscreen didn’t even break.”

Tratt spoke about that accident with V8 Sleuth writer Grant Rowley in September 2018.

“It was enormous; I’m still paying for that today,” he said of the Phillip Island '05 shunt.

“I’d done a million laps around that place. I was on a really good lap, I was ahead on all of my sectors and I just dropped the left rear on the dirt and it bolted.

“I became a passenger very quickly. The sand trap wasn’t in the right place and I hit the wall full pelt.

“I think they worked out that I hit the wall with 22,000kg of force that hit the dirt mount. If you watch the slow motion replays, the rear wing delaminates and almost takes the head off a photographer.

“I was OK, but I got airlifted to the Alfred [Hospital]. My brain swelled up a little bit, but they let me out that night because I felt fine. I was back at the track the next day.

“I had to go see a neurosurgeon twice a week for a while after that to keep an eye on things. When you have incidents like that, you can get blood clots, but they don’t show until two or three weeks after the incident.

“I’d stretched my neck a little too, I felt fine, but [the neurosurgeon] said 'come see me in 10 years' time'. And he was right, it still gives me grief today.”

Repaired over the off-season the chassis ended up continuing with the Perkins team in 2006, albeit in the Fujitsu Series (now Super2).

The car became rookie Shane Price’s #77 Perkins-run Commodore for the first round in Adelaide before it was re-stickered to a Jack Daniel’s car for Paul Dumbrell to use at Albert Park’s non championship even and returned to Price for the rest of the development series, above at Wakefield Park, in which he finished second to champ Adam Macrow.

The car returned to the main series at the end of the season, running under the #39 Sirromet Wines entry at Symmons Plains with Price driving and then in Bahrain with Jack Perkins at the wheel.

After laying idle for 2007 it was sold in 2008 to Tim Slade and his backer James Rosenberg for the Fujitsu Series. The young gun drove it all season and won the round at Wakefield Park that year, below, a breakthrough result in his still-developing V8 Supercar career at the time.

Initially Slade was preparing the car at Independent Race Cars, however moved it to being run from the Perkins Engineering workshop for the second half of the season.

The car only made one more appearance in the development series, coming in 2010 in the final round at Sydney Olympic Park with new owner Bruce Oaklands at the wheel and failing to qualify.

Current owner Turner purchased the car in February 2011 and runs a six-litre engine put together by PM Engines in Adelaide punching out a cool 684 horsepower at the flywheel. The car still runs a H-pattern Holinger gearbox too!

So there you have it, yet another V8 Supercar that is continuing its life racing overseas – exactly the sort of history we specialise in here at V8 Sleuth!

Don’t forget to visit out V8 Sleuth Online Store for some Christmas presents too – visit it here!