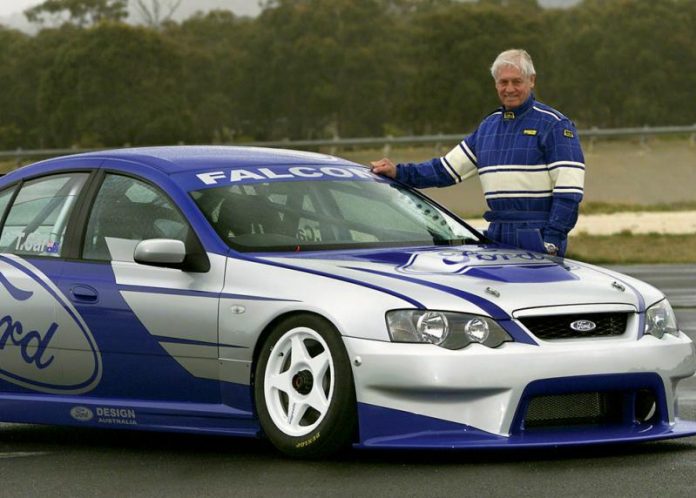 Johnson piloted the Ford Performance-branded machine – the same DJR Team Penske-built chassis which did the track testing for the new model in late 2018 – in the Mustang GT’s first official laps at a race meeting.

“When I was approached with the concept, the first question I asked was ‘what’s the lap record?'” the ever-laconic 73-year-old joked.

“But seriously, it’s been a long time since I’ve been behind the wheel of a full-spec Supercar, and to get the chance to drive the new Mustang is something I’m very much looking forward to.”

While Johnson initially farewelled the sport at the end of the 1999 season, he made a one-off return at the following year’s Queensland 500.

Surgery had solved the sinus issues which had plagued his final year behind the wheel and, with DJR’s Bathurst co-driver Jason Bright unavailable for the Ipswich race, Dick joined son Steven for one last even

“I did the best I could last year, but I was so crook I was lucky if I could see where the road went half the time, and I don’t want my last memories of racing to be like that,” he said at the time.

“I’ve had some heavy duty surgery which has fixed the problem and now that I’m feeling well I’d love the opportunity to have one last red hot go.”

Unfortunately he didn’t get very many laps on race day, an engine failure ending his 321st and last championship race start just a handful of tours into his stint behind the wheel.

A couple of years later, Johnson was back driving a Supercar – albeit not in a racing capacity.

The Ford legend was given the opportunity to give the new BA Falcon racecar its public debut on race day morning of the 2002 Bathurst 1000, turning two laps of Mount Panorama with Ford Australia boss Geoff Polites sitting alongside.

Johnson got back behind the wheel of a Supercar again in 2004, once again with a passenger, but this time to raise money for charity.

Two hotlaps of the Gold Coast Indy circuit with Johnson were auctioned off on eBay, the proceeds going towards breast cancer research.

Taking place just after Saturday’s Top 10 Shootout, Johnson took the winning bidder for a ride in the very same #17 Shell BA Falcon that Steven was set to race later that afternoon (pictured above).

“It’s been a long time since I’ve done anything like that, I felt a little rusty on my first lap but it all came back to me pretty quickly.

“I’m quite happy to leave the driving to today’s professionals, but I did enjoy the experience.”

But, prior to Adelaide 2019, when was Johnson’s last time behind the wheel of a contemporary Supercar?

We’re reliably informed that he hopped behind the wheel of one of his team’s Falcons for a couple of laps at Queensland Raceway in the 2006-2008 era … complete with thongs for footwear!