Home News SLADE GOES BACK TO THE FUTURE WITH CHASSIS SWITCH 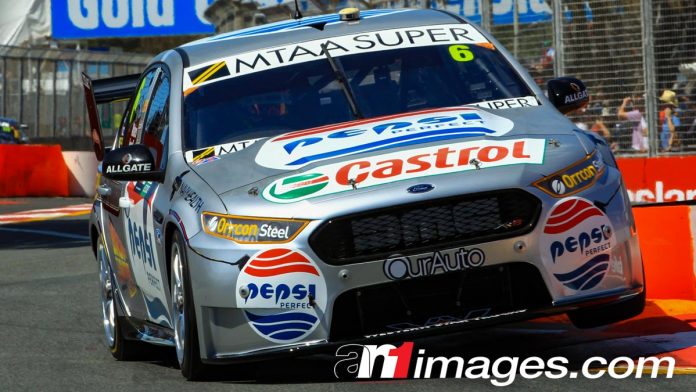 TIM Slade’s savage crash at the Repco Mount Panorama 500 will result in one of the oldest chassis of the current era making a return to the grid.

Slade’s Blanchard Racing Team will campaign FPR 1215 at the upcoming Penrite Sandown SuperSprint, a car that began its life as the very first Car of the Future-spec Ford to hit the race track.

In fact, this car has become something of a super-sub: Sandown will mark the fifth time it has been recalled to the ‘main game’ to replace a crashed car!

GIBSON: The handshake deal that freed Lowndes from HRT

Built by Tickford Racing – still known at the time as Ford Performance Racing – during 2012, it was the first of the team’s fleet of FG Falcons built to Car of the Future rules to hit the race track for testing.

It was also the first of the new-generation cars to be shown off to the public, taking part in a demonstration alongside the new generation Holden Commodore and Nissan Altima at that year’s season-ending Sydney Telstra 500.

The prototype car served as one of the team’s race chassis for the 2013 season, becoming David Reynolds #55 Bottle-O Racing entry.

It was aboard this car that Reynolds claimed his first Repco Supercars Championship race victory, combining with Dean Canto to win the Sunday race at that year’s Gold Coast 600.

In fact, Reynolds is just one of the big-name pilots to have campaigned this car – including his current Kelly Grove Racing teammate!

The chassis reverted to FPR’s spare in 2014 but was wheeled out for the Bathurst 1000 as the wildcard entry for Super Black Racing, piloted by Andre Heimgartner and Ant Pedersen.

The following Gold Coast round marked the chassis’ first as a substitute: Reynolds returned to the chassis for the remainder of the year while the team made proper repairs to the car he crashed in qualifying at Bathurst.

It was back at Mount Panorama a year later, upgraded to the then-new Falcon FG X body style, for another wildcard appearance.

Simona De Silvestro and Renee Gracie drove the chassis as the Harvey Norman Supergirls entry, finishing a distant 21st after Gracie slid into the barriers at Forrest’s Elbow after hitting a trail of oil.

Tickford pressed the car back into service for the remainder of the season to replace the FG X destroyed by Chaz Mostert’s qualifying crash at Mount Panorama.

With Mostert out injured, Cameron Waters and Russell Ingall drove the car in a ‘Back to the Future’ Pepsi Perfect livery at the Gold Coast 600, before Waters made his first solo Supercars starts at Pukekohe and Phillip Island, while Steve Owen rounded out the season aboard the car at Sydney Olympic Park.

The car moved across to the team’s Super2 Series program for 2016 – but not for long.

Eventual series victor Garry Jacobson drove the car in Adelaide to his first Super2 race and round victory, but Super Black Racing driver Chris Pither’s nasty crash at Turn 8 meant the chassis was recalled to the ‘main game’.

FPR 1215 became the Super Black car for the remainder of the season; one where Pither claimed an ARMOR ALL Pole Position at Queensland Raceway and was joined by Richie Stanaway at the enduros for his Supercars debut.

The car remained in Tickford’s main game fleet despite the closure of Super Black Racing; new signing Jason Bright drove the car for much of the early part of 2017 before it again reverted to being Tickford’s spare.

Stanaway made a cameo appearance aboard it at Sydney Motorsport Park’s Super2 round, where he claimed victory in the final race of the weekend.

The chassis’ next Super2 appearance ended more abruptly: Thomas Randle crashed it heavily at Adelaide’s infamous Turn 8 during his debut second-tier race in 2018.

While Randle swapped to a different chassis for the rest of his rookie campaign, this car was repaired and sold to Phil Munday’s 23Red Racing outfit where it was used as a spare and ride day car.

Tickford Racing upgraded the car to a Mustang GT for Randle to race as a wildcard entry at the inaugural Supercars round held at The Bend Motorsport Park, where he impressed by qualifying 14th for the opening race.

The car was once again pressed into service for the final rounds of the 2019 season following Mostert’s massive crash in the Top 10 Shootout at the Gold Coast 600.

Then serving as Tickford’s #55 entry, Mostert and James Moffat drove it to second place in the Sandown 500, before Mostert took the car to sixth place in its most recent race appearance on the Sunday at that year’s Newcastle 500.

FPR 1215’s longevity will be rewarded with a milestone achievement in its latest recall to active duty.