Home News SLEUTHING: EVERY V8 SUPERCAR AT THE SYDNEY CLASSIC 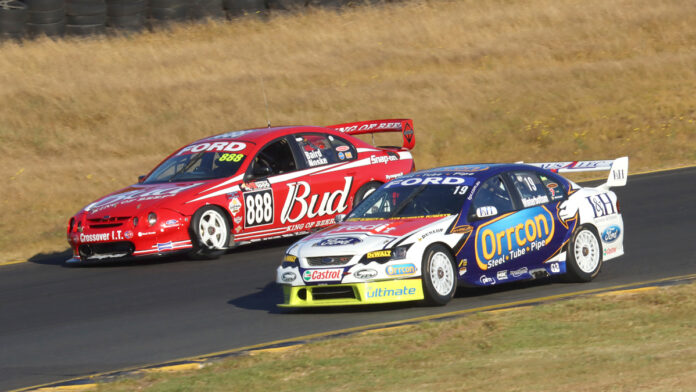 THE 2022 HSRCA Sydney Classic featured a selection of V8 Supercars on track for a series of sprint sessions across the two-day event.

This special Sleuthing instalment provides a snapshot of each of the eight cars that took to the Sydney Motorsport Park circuit.

Appropriately enough our chronologically-ordered list begins with a car that was among the first built to the five-litre rules that eventually became known as V8 Supercars.

This distinctively coloured Pro-Duct Commodore was the first built by Perkins Engineering to the new ‘winged’ touring car formula.

Although competing in various hillclimbs, club sprints and Sports Sedan races under subsequent owners, it remains a rare example of a VP that was never upgraded to VR/VS.

Another Perkins Engineering car, this Commodore was effectively built in Western Australia by privateer Ian Love’s crew from a Perkins-supplied VP bodyshell.

While Love raced it only in WA (which included being joined by John Bowe for the 1993 Wanneroo 300), it finally competed in the Bathurst 1000 in 1998 and ’99 under the ownership of Mike Imrie.

It also raced extensively in the ATCC by Imrie across those two seasons and is presented as it was shared at Bathurst in 1998 by Imrie and the late Rodney Crick.

As described in our separate Sleuthing article, this car isn’t actually the GearBox Commodore that Schembri raced during the mid-to-late 1990s (which was written off in 2000).

Instead, this car was built by Perkins for David ‘Truckie’ Parsons, who raced it occasionally before selling to Robert Smith, whose team fielded it in the 1997 and ’98 Bathurst 1000s.

Although it eventually raced in all three tiers of V8 Supercar competition, its claim to fame came on the Lake Gairdner salt flat; a 313km/h run in 2005 making it the fastest V8 Supercar ever!

This Castrol Commodore is among a considerable collection of vintage V8 Supercars owned by PremiAir Racing principal Xiberras.

It was run by Perkins Engineering for Larry Perkins and Steven Richards in 2001 and ’02 respectively, although rested for the enduros in both years.

The car was later raced in the Development Series by Jay Verdnik, Aaron McGill and Clayton Pyne before passing through the hands of a number of collectors.

This Falcon was built by Prancing Horse Racing but only raced once in the hands of the Budweiser-backed squad, shared by Mark Noske and Craig Baird in the 2001 Bathurst 1000.

PHR 014 raced on in the Touring Car Challenge, V8 Touring Car Series and Sports Sedans under subsequent owners before being returned to its 2001 Bathurst colours.

This Ford Performance Racing Falcon was debuted in mid-2003 by David Besnard and became Craig Lowndes’ CAT-backed entry for the following season.

The car is currently presented as it finished second in the 2004 Bathurst 1000, shared by Lowndes and Glenn Seton, in an otherwise disastrous year for the team.

It was sold to Britek Motorsport and raced in the main game by various drivers from 2005-08, including Bright himself, before spending time in the V8 Touring Car Series.

This Paul Morris Motorsport Commodore was raced by ‘The Dude’ during his final full-time V8 Supercars Championship season in 2008.

Morris raced it in all events bar the Phillip Island and Bathurst enduros, where Brit Matt Neal and American Boris Said shared the car.

It was sold to Dean Fiore midway through 2009 and raced by the West Aussie in the main game (joined by Troy Bayliss for the enduros), before stints in the lower tiers with Todd Fiore and Jack Sipp.

This Ford Performance Racing Falcon was Mark Winterbottom’s car for the 2008 V8 Supercars Championship, in which ‘Frosty’ won seven races and finished runner-up to Jamie Whincup.

It was then sold to MW Motorsport and raced in the second-tier by the likes of Brad Lowe, David Russell and Luke Youlden, before underpinning 14-year-old Alex Rullo’s debut V8 Touring Car season.

Bathurst local Michael Anderson also raced the car in V8 Touring Cars for a period, before it was on-sold and eventually returned to the Orrcon Steel colours in which Winterbottom raced it.