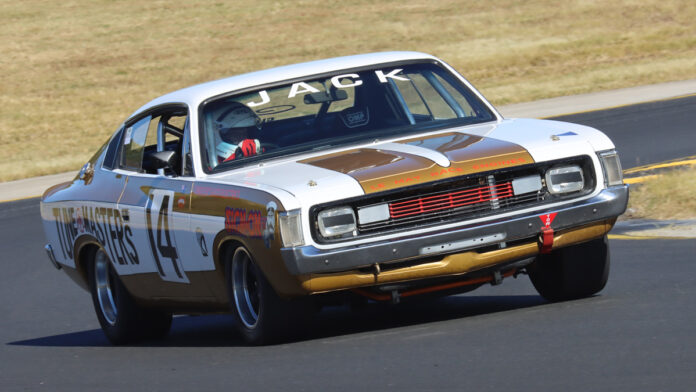 A STRONG field of Heritage Touring Cars representing the Group C and A eras hit the track at Sydney Motorsport Park’s Sydney Classic.

The 20-car field that took to the circuit included a variety of interesting cars making their debut in the HTC field, alongside the usual favourites.

SLEUTHING: Every V8 Supercar at the Sydney Classic

Here’s a snapshot of the cars that were in action, courtesy of Gran Turrisi Photography.

This car was constructed by Bond’s Caltex team ahead of the 1992 Bathurst 1000, where it completed just seven laps in what proved its only in-period race.

It’s done plenty of racing since though, including most recently in the hands of Jonathon Webb and father, Steve.

This pair of ex-factory Nissan Bluebirds shared a grid for the first time since 1984, on this occasion with owners Brian Henderson and Adam Workman behind the wheel.

You can read all about the history of Henderson’s Bluebird and its 37-year race drought here and learn more about the trickery that made the 1.8-litre turbos so fast here.

This Group C Charger was also a new addition to the HTC ranks following its restoration in the hands of owner/driver Craig Marsland.

Its in-period driver was Kiwi Doug Jack, who bought it as a daily driver upon moving to Australia but converted it to a Group C race car after meeting Charger racer Marsland at Wanneroo in 1975.

Raced extensively by Jack and eventually parked, Marsland purchased it as a rolling shell in the 1990s and recently completed a full rebuild to its 1977 Group C glory.

This car was built by Mercedes-AMG and run in Kärcher colours during the 1991 DTM by MS-Jet-Racing (which fielded Jörg van Ommen and Frank Schmickler).

It was retained by the team as a T-car the following season before being returned to AMG, which used it for testing and development with drivers Klaus Ludwig and Bernd Schneider.

Terry Lawlor aboard his ex-Bob Morris Falcon XD, presented as Morris, Bill O’Brien and –
after his own car failed – Allan Moffat drove it in the 1980 Bathurst 1000.

Experienced racer Lawlor chalked up a trio of top five finishes aboard this car at the Sydney Classic, including a best of second in Race 2.

This is Rick Allen’s Benson & Hedges BMW E30 M3, as driven to fourth place by Tony Longhurst and Johnny Cecotto in its debut race, the 1992 Bathurst 1000.

It was used by the Frank Gardner-led team for another 18 months, which included being run as the Longhurst/Steve Soper entry in the 1993 Bathurst 1000.

The car was then sold and converted into a Sports Sedan, beating the V8 opposition to the 1995 Australian Sports Sedan Championship in the hands of Cameron McLean.

Tony Alford’s GIO Nissan GT-R is one of just five examples of ‘Godzilla’ produced by Gibson Motorsport in the early 1990s, and the only one built for a customer team.

Under the ownership of Bob Forbes and driven by Mark Gibbs/Rohan Onslow it won the 1991 Sandown 500 by six laps and went on to finish third in the Bathurst 1000 the following month.

It remains rapid in the hands of Alford, qualifying and finishing second to Webb’s Sierra on Saturday at the Sydney Classic.

Jamie McDonald behind the wheel of the ex-Bob Pearson Pro-Duct VN Commodore, which like many of Pearson’s cars carried a distinctive paint scheme.

This car was the first of the VN models built by Perkins Engineering and made Bathurst 1000 appearances in 1991 and ‘99 (having been upgraded to a VP in 1993).

It was later restored to its VN glory and is presented by McDonald how it raced in the 1992 Winfield Triple Challenge at Eastern Creek.

Among the Group C Torana A9Xs on track was this ex-Bill Patterson Racing example driven by owner Russell Stenhouse.

Heritage Touring Cars also features some of the class-contending Group C cars of the day.

The next appearance for the Heritage Touring Car category will take place at the Winton Festival of Speed on August 6-7.