Home News THE CHAMPS WHO DIDN’T ATTEMPT A TITLE DEFENCE 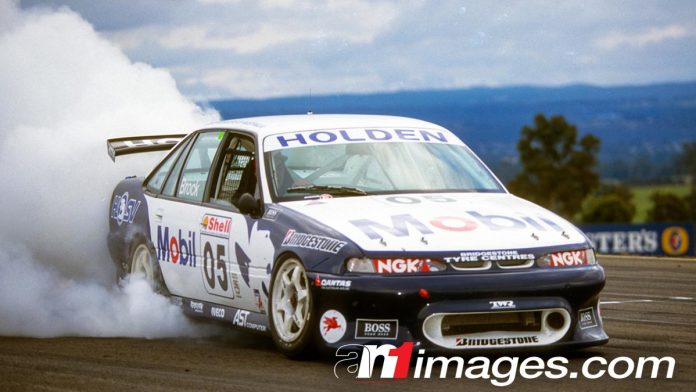 THE ABSENCE of a reigning champion on the Repco Supercars Championship grid in 2021 will mark a very rare occurrence.

Scott McLaughlin of course won’t be defending his title, instead making the big leap to IndyCar in the United States with Team Penske, only returning to Supercars for a co-driving cameo at Bathurst.

So how many drivers have won the title and not elected to return? It’s a topic discussed on a recent Q&A episode of the V8 Sleuth Podcast powered by Timken, and worth revisiting in more detail.

In the 61-year history of the Australian Touring Car/Supercars Championship, just three other drivers elected not to mount any sort of title defence.

Two more bailed out of their campaigns early, including one in controversial circumstances, which we’ll get to later in the story…

A prominent journalist and experienced racer, McKay won the inaugural ATCC title in 1960 – contested over a single race at Gnoo Blas in his native New South Wales, driving a Jaguar Mk1.

While the Jags were again the cars to beat in the ATCC in 1961, McKay chose not to compete, instead focusing his racing efforts on his open-wheel and GT activities.

In fact, that 1960 race remained McKay’s only ever career ATCC start, giving him a perfect win-rate!

Not long after becoming the second Kiwi in as many years to win the ATCC title in 1986, the prospect of Francevic defending his crown took a major dip.

Francevic had a public falling out with the Volvo Dealer Team and split with the squad following that year’s Sandown 500. As it turned out, the team was disbanded post-season anyway.

Although he linked with former Volvo team owner Mark Petch to field a Sierra at Bathurst less than a month later, he was without a ride for the 1987 season, not making a single appearance.

Before taking the drive at the Holden Racing Team for 1996, a 20-year-old Lowndes had made no secret of his desire to head overseas.

So, it was little surprise that – after sweeping the ATCC, Sandown 500 and Bathurst 1000 during that whirlwind year – he was off to Europe, rather than defend his crown.

After winning the 1971 and ’72 titles, changes to the Group C regulations intended to put a greater emphasis on Australian machinery ruled Bob Jane’s Camaro out of the 1973 fight.

Under the revised rules, there had to be 25 ‘identically similar’ Camaros to Jane’s in Australia in order to race – the definition of which was debated by the tyre tycoon.

Jane contested the 1973 opener at Symmons Plains aboard an XU-1 Torana and then campaigned – and won with – the Camaro at Calder, before inevitably being excluded from the results.

As illustrated in V8 Sleuth’s new book, Racing the Lion – available now through the V8 Sleuth Bookshop – Jane was offered the use of the Holden Dealer Team’s spare Torana for the following round at Sandown but turned it down, instead electing to skip the remainder of the season.

Likewise, the winner of the 1973 title, Allan Moffat, didn’t see out the ‘74 season as reigning champion.

Without factory support following Ford’s withdrawal and trailing Peter Brock in points after four rounds, Moffat decided he’d head to the United States in May – leading a tourist trip to the Indianapolis 500 before focusing on the Stateside build of a new Falcon for Sandown and Bathurst.

Before jetting off, Moffat actually won Round 5 of the ATCC at Oran Park and closed Brock’s points advantage but, having already committed to the Indy trip, his title defence was at an end.

As a footnote, it’s also worth mentioning that Mark Skaife was absent from the first round of the 1995 season after winning the championship in ’94.

However, that was due to injuries from a testing accident, rather than a planned exit from the category, and he returned for Round 2.