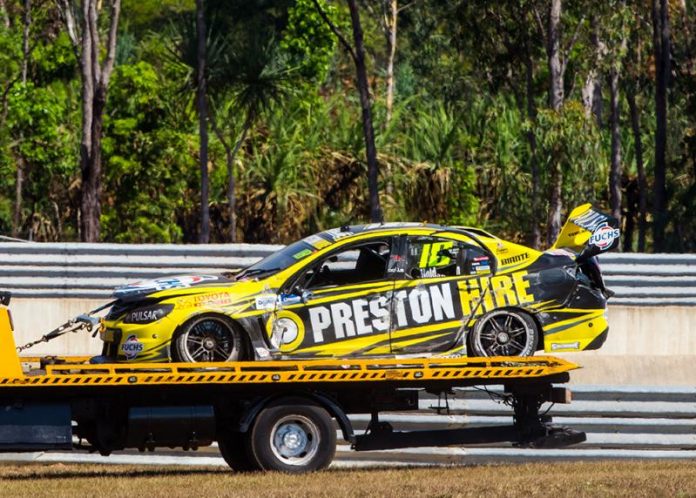 TODAY’S edition of Apex Replicas RIP Racers features a Supercar that was the first Car of The Future machine to officially hit the track before making one-off racing appearances and ending up as Lee Holdsworth’s 2016 Preston Hire VF Commodore.

This particular Commodore met its demise in a heavy shunt at Hidden Valley in 2016 when Holdsworth was shot out of the pack and slammed the wall hard at the circuit in the Northern Territory.

The impact with the concrete left the car destroyed and Holdsworth with fractures to his right knee, two ribs and pelvis – causing the then 33-year-old to miss three rounds of the 2016 season.

Prior to its career-ending accident, this car was originally built in 2012 by Triple Eight Race Engineering, becoming the first Car of the Future chassis completed by the team.

Craig Lowndes and Jamie Whincup drove it during a systems shakedown at the Norwell Holden DrivingCentre in July 2012 before the car made its first public display in a camouflage livery at that year’s Ipswich round of the championship.

The car then completed its first official test at Queensland Raceway in August, becoming the first Car of the Future machine to hit the track.

It was kept as a spare in 2013 and rebuilt in updated specification before becoming the team’s dedicated ride car and later pressed into action at Bathurst as the XBOX wildcard entry for all-international combination Andy Priaulx and Mattias Ekstrom.

The pair impressed and came from 18thon the grid to finish The Great Race 10thaboard the green machine that was noted for its impressive straight-line speed on the day.

Triple Eight retained the Commodore as a ride car in 2014 and it was used in the Ultimate Speed Comparison at the Australian Grand Prix at Albert Park, with Steve Richards, Lowndes and Whincup all driving the car against an AMG Mercedes-Benz and a 2011 specification Red Bull F1 machine.

The chassis remained a ride car in 2015, though it was taken to the KL City Grand Prix in Malaysia for Lowndes to drive in the five-car demo races.

Triple Eight sold the Commodore to Charlie Schwerkolt’s Team 18 for the start of the of the 2016 season and it became Holdsworth’s #18 Preston Hire car up until its Darwin crash.

It was first thought the car could be repaired, though further inspection deemed the car too badly damaged to be worth repairing, ensuring this car is unlikely to ever race again.