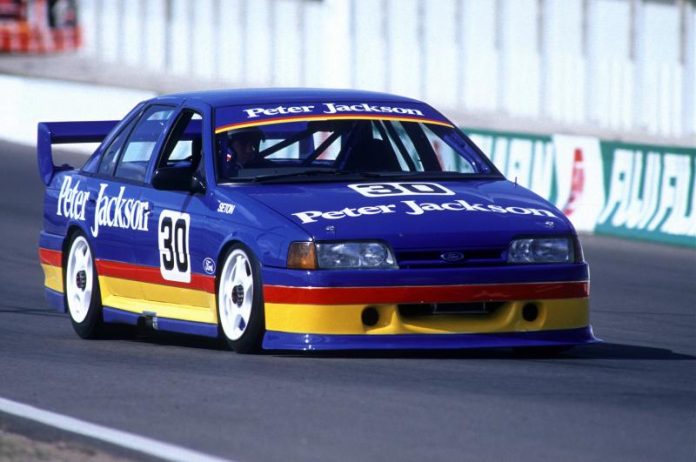 TODAY’S Apex Replicas RIP Racer features a car that played a starring role in reigniting the war between Ford and Holden and became the first Falcon touring car to hit the track in the Bathurst 1000 in eight years – Glenn Seton’s 1992 Peter Jackson EB Falcon.

Seton was one of the first to commit to the new V8 formula and his team put together its very first Falcon EB race car – chassis GSR1 – during the 1992 season.

However, this car never even saw the ’93 season after Seton suffered a huge crash in ’92 at the season-ending Australian Grand Prix support event in Adelaide, sending it to the scrapheap – a sad way to end its brief competition life.

You can read the history of this carand every other Falcon Supercar built in our 240 page publication ‘The Falcon Files’ available for purchase here in the V8 Sleuth Online Store!

Testing of GSR1 was initially conducted during ’92 and the car made its first public appearance at the Tooheys 1000 Media Day at Bathurst in August with Seton at the wheel before he and new team signing Alan Jones gave the car its race debut in the Drink Drive 500 at Sandown.

Seton qualified the new car sixth however brake problems meant it completed only 18 laps of the race.

Things went better for the car at Bathurst, the first V8 Falcon to race in the Bathurst 1000 since 1984 and one of four of the new 1993-spec cars entered in the race in its own ‘Divison 3’ class alongside a pair of Holden Racing Team Commodore VPs and Peter Brock’s Mobil/Advantage Racing entry.

Seton qualified an impressive fourth in the Top 10 Shootout among the turbo cars and Larry Perkins’ well-sorted VL Commodore, though he and Jones were again retirements from the race, this time due to a failed fuel pump.

The car made just one more racing appearance at the Adelaide Grand Prix meeting with both this car and Johnson’s new Shell Falcon excluded from qualifying and forced to start from the rear of the grid due to issues relating to the homologation date, rear bumper and aerodynamic kit.

In the end it all meant very little as Seton was in the fence and done within four laps ending the life of this history-making Ford race car, though safe in the knowledge it had paved the way perfectly for the cars that followed from the Glenn Seton Racing workshop.