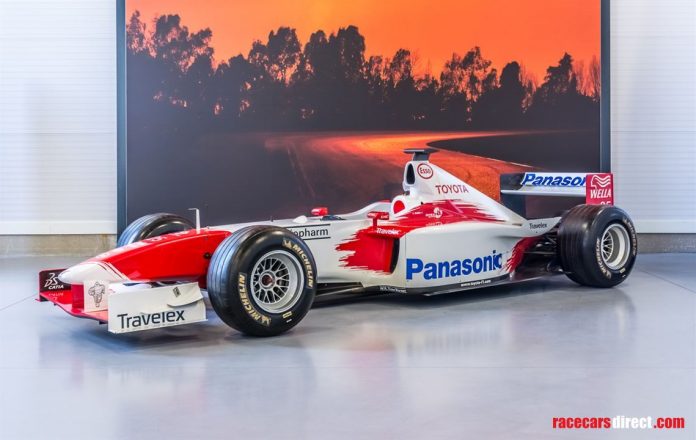 ONE of the Toyota Formula 1 cars driven by Ryan Briscoe has come onto the market in Europe, complete with its three-litre, V10 engine.

After a year testing an interim car, the TF102 was the first model used by the Japanese marque when it joined the world championship in 2002.

Briscoe was Toyota’s first recruit to its driver development program the previous year, and for 2002 was appointed as an official test driver for its F1 team alongside fellow tester Stephane Sarrazin and race drivers Mika Salo and Allan McNish.

Briscoe was one of three high-profile Australian drivers holding F1 roles in 2002, with Mark Webber making his F1 race debut with Minardi that season, while future Supercars Champion James Courtney was a test driver for Jaguar.

The car up for sale is chassis 03, one which never took part in a Grand Prix but instead was used exclusively by Toyota’s test team.

This chassis was only used at three tests during the year – at Silverstone in May, Jerez in June and Monza in July – for a total of 1,384 kilometres and driven by all four of its drivers, Briscoe piloting the car at the Spanish and Italian tests.

In fact, Briscoe actually crashed the car on the final day at Jerez, giving himself a bit of whiplash in an incident triggered by understeering over an exit kerb at the Curva Sito Pons.

The listing states that TF102/03 was purchased directly from Toyota Motorsport GmbH in Germany a year ago and comes complete with a genuine Toyota RVX-02 V10 engine from the period – although the car is not currently running.