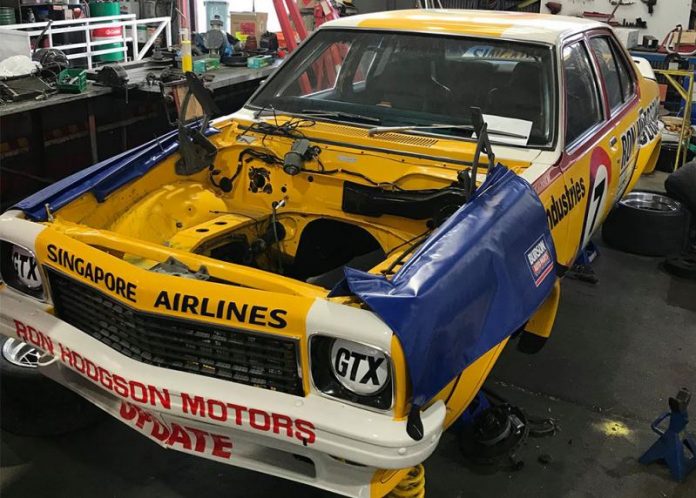 THE National Motor Racing Museum at Mount Panorama has begun maintenance work on the 1976 Bathurst-winning L34 Torana of Bob Morris and John Fitzpatrick.

The #7 Torana was taken into the Bathurst Regional Council workshop recently to undergo light restoration work on the engine bay along with a service of the electronics, differential and the replacement of its suspension bushes.

News of the restoration work comes following our recent announcement that the National Motor Racing Museum has become a key client of V8 Sleuth – read the announcement here.

Maintenance of the Ron Hodgson Motors Torana is part of the Museum’s efforts to preserve their cars and ensure they are kept in a safe running state.

National Motor Racing Museum Coordinator Brad Owen said the decision was made to service the L34 after issues arose during its last outing.

“The car was used in a parade lap of the circuit with Garry Rogers at the wheel,” Owen told V8 Sleuth.

“A couple of small issues cropped up – it wasn’t handling predictably and there was an electronic issue as well, so we wanted to deal with the rear end while we put some new bushes in it.”

The work will leave the Council-owned L34 off the museum floor briefly, all part of the desire to keep the cars running.

“The Moffat ’77 car got a bit of work done last year and we do this kind of upkeep so we can keep these cars running and have them out from time to time,” added Owen.

Interestingly this isn’t the first time that the ’76 winner has undergone work at the hands of the Bathurst Regional Council given the car was found as a bare shell in the Southern Highlands after ending its racing days in Sports Sedan competition.

The Bathurst Regional Council took ownership of the Torana and enlisted the help of local mechanics and former Council staff to restore it to its 1976 glory before displaying it in the Museum.

The carfinished second in the 1975 Hardie-Ferodo 1000 with Morris and Frank Gardner driving before Morris returned to Bathurst with this car in ’76 and went on to take a memorable and emotional victory alongside Englishman John Fitzpatrick – the first international driver to win The Great Race.

Re-live the drama of the 1976 Hardie-Ferodo 1000 with 7 Sports Magic Moments of Motorsport – Bathurst 1976 DVD, featuring over five hours of footage from that year’s race. Click here to grab your copy now.

The car returned to Bathurst as a training car for Johnny Rutherford and Janet Guthrie in 1977 as they learnt the circuit in practice before later competing in Sports Sedans.