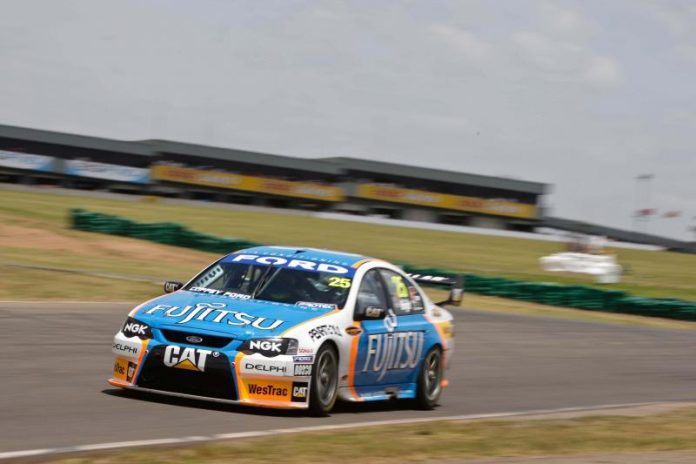 A FORMER Jason Bright Fujitsu/Britek Motorsport Falcon will give Albury driver Mark Tracey the chance to live a dream in the next round of the Kumho V8 Touring Car Series at The Bend Motorsport Park in South Australia.

He’ll be making his series debut, and indeed his debut in a V8 Touring Car after a long road to eventually be in the position to own such a vehicle.

“I raced against Brad Jones and Nathan Pretty at the local kart track back in the day but I never had the money to go on with it so I’ve just tinkered away and done a few things I could afford without having to mortgage the house and now I’m in the position to do this,” Tracey told V8 Sleuth.

“I did the Daewoo and the Lotus Series back in the day and I’ve done some track days and bits and pieces in a Porsche too.

“I recently built a BMW E36 with an LS3 motor in it and been pedaling it around on track days – it’s basically a German Commodore!”

Tracey tested his Falcon at Winton last week and will take part in a test day at The Bend Motorsport Park prior to the Kumho Series round there.

He says a range of industry people have helped in making the chance to compete in the Kumho Series come to fruition.

“Terry Wyhoon is taking the car over there and going to run it for me, which is great and over the years I have helped out Brad Jones Racing via my business, they’ve been great and helped with tyres and their staff have done the bumpers and stickers – motorsport’s a big family and it’s really cool that people chip in and help get you going.”

Tracey’s Falcon was raced in the V8 Supercar Championship Series by Jason Bright for the majority of 2008 before the closure of Bright’s Britek Motorsport operation at the end of that season.

To read about the history of this car order ‘The Falcon Files’ here, which documents the racing history of every Supercar Falcon from 1992 to 2017.

The car last appeared in the Kumho Series in 2016 with Jack Sipp at the wheel and was purchased by Tracey late last year. He’ll eventually return it to its 2008 Bright/Fujitsu livery.