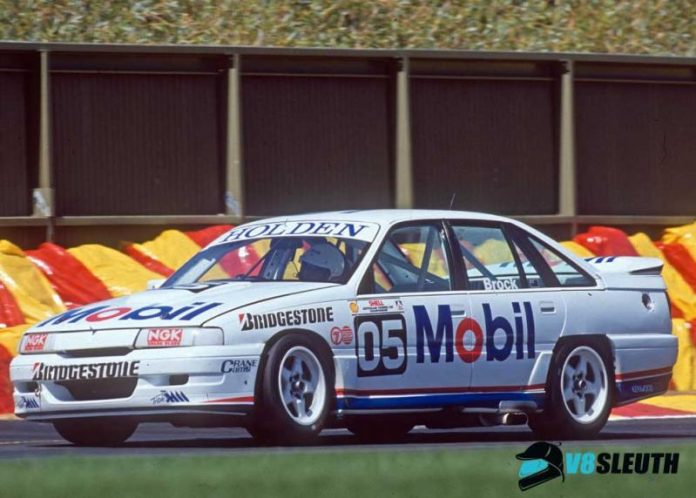 PETER Brock’s 1991 and 1992 Mobil VN Commodore has found itself a new home and its new owner is bringing it along to be part of the Retro Revival Display at the Wilson Security Sandown 500 on September 16-18.

The car – originally built by Perkins Engineering in 1991 when Larry Perkins and Brock teamed up in a pair of Mobil-backed VN Group A Commodores – has recently been acquired by Victorian driver/collector Keith Linnell, who also owns one of the three Peugeot 405s used by Brock’s team in the 1992 Bathurst 12 Hour.

Formerly owned by Tasmanian Lawson Reid, the V8-powered Commodore has been spending time at the Launceston Motoring Museum in Tasmania but was collected this week by its new owner and returned to Melbourne.

Brock raced it for the majority of the 1991 Australian Touring Car Championship as well as the Sandown and Bathurst endurance races. It’s the car that features in the very popular video of Brock’s Top 10 Shootout lap at Mount Panorama that year.

Brock again raced it during the 1992 ATCC, including taking a victory at Amaroo Park in the wet opening round. He last ran the car as a VN in the ’92 Drink Drive 500 at Sandown with Troy Dunstan as co-driver.

The car has been returned to Mobil VN bodywork with Peter’s brother Phil expected to slip behind the wheel as part of a parade of the Retro Revival race cars at Sandown in a few weeks’ time.

A range of other interesting race cars from the 1960s, 70s and 80s is being assembled by the V8 Sleuth team for the Supercars endurance classic with more to be confirmed in coming days.