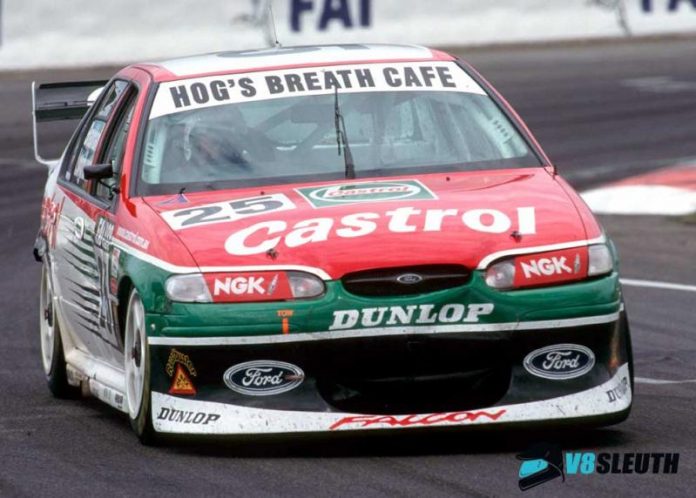 THE Castrol Falcon that Tony Longhurst qualified on the front row of the grid for the 1998 FAI 1000 Classic at Bathurst has recently changed hands.

Former Touring Car Masters racer and long-time Historic competitor Carey McMahon has acquired the Falcon EL from its long-time owner Darren Saillard and has begun the process of returning it to its former Longhurst livery.

Longhurst raced the Falcon for the entire 1997 and 1998 V8 Supercar seasons, qualifying it on the front row at Bathurst in ’98.

To see a photo of this Ford every year it competed at Bathurst – plus every other Ford to race at Bathurst from 1963 to 2018, order our new ‘Ford at Bathurst’ limited edition collector’s book here.

The car was driven by Holt in the inaugural Konica V8 Lites Series in 2000 and eventually was sold to Saillard, who last raced it in the 2008 Touring Car Challenge – a combined category catering at the time for ex-V8 Supercars, Super Tourers, Future Tourers and even Group A touring cars.

“This is a real beauty and I can’t wait to test it out next year,” posted McMahon on social media recently.

Watch Longhurst in action in the 1998 FAI Bathurst Shootout as he puts the car on the front row of the grid.

The ex-Longhurst Falcon joins another of the former Bathurst winner’s race cars in McMahon’s stable – the 1990 Benson & Hedges Sierra RS500 Cosworth driven by Longhurst in that year’s Bathurst 1000.

The turbo Ford will be in action at the Sandown Historics in November with Porsche GT3 Cup Challenge young gun Jimmy Vernon at the wheel in the Heritage Touring Cars (Group A & C) category.