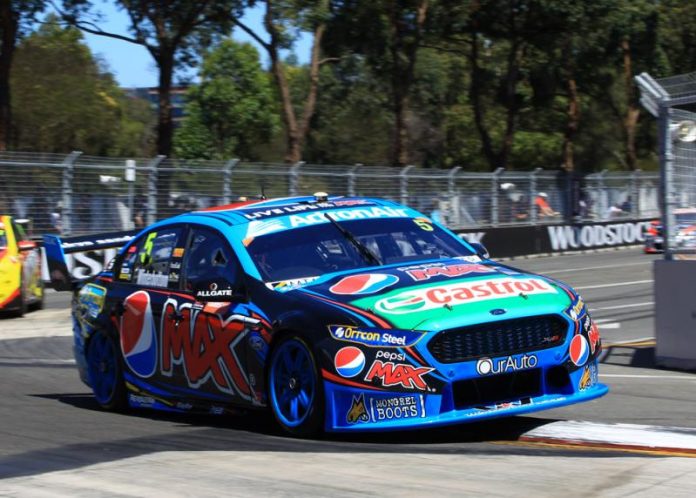 This particular Falcon is best remembered for its role in delivering Winterbottom his breakthrough Supercars title in 2015 having used the chassis all season – taking a career-best nine race victories during that year.

Ford Performance Racing originally commenced the build of this chassis – FPR 1217 – way back in 2012 before completing the job in 2013, though it didn’t turn a wheel until the following season.

The Falcon was finally completed as a race-ready car for the start of 2014 and was debuted by Winterbottom as the #5 Pepsi Max Crew Falcon FG at the pre-season test day at Sydney Motorsport Park.

Winterbottom ran the car throughout that season, winning its first race (and the first for Ford of the year) at Winton on the Sunday before a string of strong results including wins at Pukekohe and Hidden Valley.

He and Steve Owen teamed up for the endurance races, highlighted by a fourth on the Gold Coast, with Winterbottom rounding off the season in this car to finish third in the championship standings.

The car was updated to FG X-spec bodywork for 2015 and ran under the Prodrive Racing Australia banner given FPR had changed its name in readiness for life after Ford involvement in the sport.

He was again teamed with Steve Owen for the endurance races and they starred, claiming the Sandown 500 in a PRA 1-2 finish.

Winterbottom and Owen came home second at Bathurst, however from there things got a little more tense and the #5 Falcon only finished on the podium one more time for the season.

But that very podium was a special one, third place in the penultimate race of the season at Sydney Olympic Park securing Winterbottom the 2015 championship, the first for both he and PRA.

PRA retained this chassis for the 2016 season and it remained in Winterbottom’s hands as the #1 Bottle-O Falcon (taking a single victory at Barbagallo) before becoming Cameron Waters’ #6 Monster Energy FG X for the rest of the season.

In 2017 this car was wheeled out for Albert Park and became Jason Bright’s #56 MEGA Fuels Falcon beginning with the Grand Prix event.

The car was benched following Bright’s crash at Symmons Plains, returning to action at Hidden Valley after undergoing repairs.

Bright used the Falcon for the remainder of the year, taking a season-best result of fifth at Pukekohe, and rounded out his full-time driving career in the car at the season-ending Newcastle event.

The car remained with the newly renamed Tickford Racing for 2018 with young Kiwi signing Richie Stanaway taking the wheel of the FG X.

Stanaway continues to race this car in the Virgin Australia Supercars Championship in the blue colours of newly signed sponsor Rabble.CLUB.

Read the rest of our ENZED Classic Cars stories on the V8 Sleuth website here.