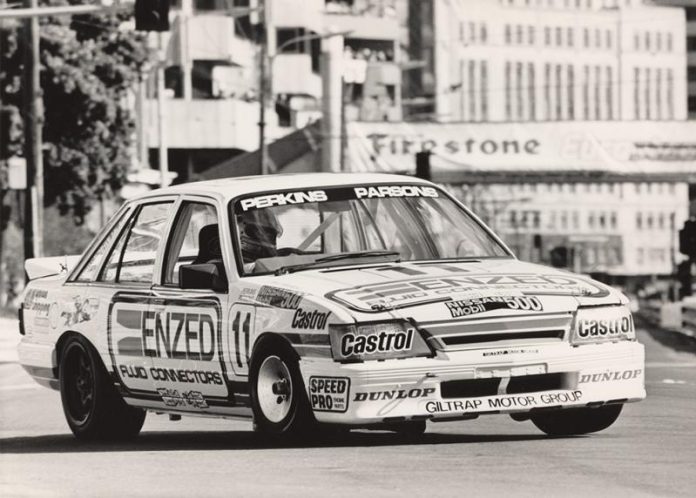 TODAY on V8 Sleuth we’re kicking off a brand new series of stories, ‘ENZED Classics Cars’, taking a look at some of the interesting and noteworthy machines from Australian motorsport history.

Join the ENZED Motorsport Club here to go into the draw to win an adrenalin-charged day at Queensland’s Norwell Motorplex.

First up is a Perkins Engineering-built car that had a short top-tier racing life though is still around today – Larry Perkins’ ENZED-sponsored VK Commodore.

Many may not realise, but there were actually two ENZED Perkins Commodores, the original he debuted in late 1986 and another VK model Holden that made its racing debut the following season.

Perkins completed the build of this car – PE 002 – in 1986 in preparation for the ’87 season and debuted the Commodore at the Nissan-Mobil 500 in Wellington as the #11 entry with Perkins and David Parsons at the wheel.

Unfortunately Parsons crashed the car and the duo failed to finish.

The Commodore was quickly repaired and returned only a week later for the Pukekohe 500 though by then Parsons had been replaced and 1967 F1 World Champion Denny Hulme drafted in to join Perkins for the event.

The move proved instantly successful and the pair went on to win the race – the first and only win of PE 002’s career.

Perkins raced the car in all rounds of the Shell Ultra Australian Touring Car Championship in 1987, claiming three podiums (second at Calder and thirds at Wanneroo and Sandown) and finishing the season fourth in the championship as the top Commodore driver.

Hulme again joined Perkins for the Castrol 500 at Sandown and they finished second in the Melbourne classic before racing the #11 ENZED Commodore again at the James Hardie 1000 at Bathurst.

Unfortunately the car was out of the race early after contact with Neville Crichton’s Shell Sierra heading up to the Cutting.

The disappointing Bathurst outing was the car’s last Group A race and its running gear was then stripped to go into the team’s incoming VL Commodore.

Following its sacrifice of parts the chassis was put aside and wasn’t seen publicly until 2003 when it re-appeared in Tasmania with Ian Johnson.

The car was fitted with running gear from its sister car PE 003 (the ex-Everlast Bill O’Brien Commodore that had also found its way to Tasmania) and was purchased by Melbourne-based plumber Steve Perrott.

Perrott has kept the car ever since and recently began the task of restoring it to its original specification and livery.

“I’ve had the car for over 10 years, it’s just been sitting in the shed with a car cover over it,” Perrott told V8 Sleuth recently.

“So we’re going to give it a bit of paint and get it looking pretty again. I’ve got Neill Burns, who worked for Larry back then, building an engine for it.”

Perrott is aiming to have the Commodore running in Heritage Touring Cars competition in the near future. He’s been a regular in the category in recent years aboard the ex-Roadways/Phillips Torana A9X Hatchbacks.

Read all of our other ENZED Classic Cars stories on the V8 Sleuth website here now.